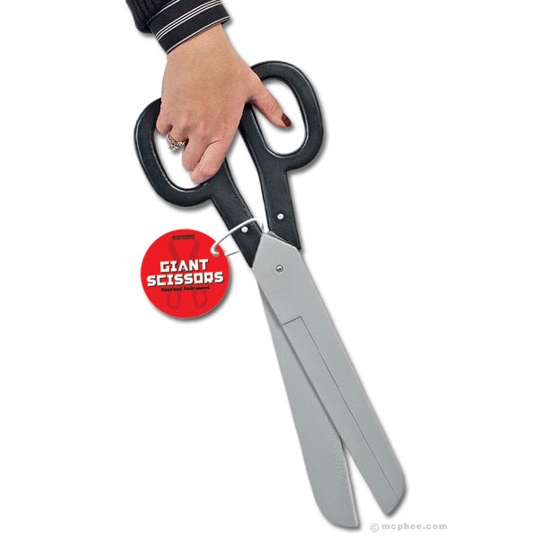 There’s just something about huge versions of normal, every day things that makes these objects all the more appealing. Take for example the Giant Doughnut Mold, which you can use to make your own enormous donuts. Or the Big Time Wall Clock which looks like a giant watch face that you can hang on your wall. While these two are pretty functional on their own, the Giant Scissors aren’t good for anything except for the fact that they can bring a smile (or coax out a scream) from the people it comes into close proximity with.

That’s right. You can’t really cut anything with these Giant Scissors, but we certainly understand why it’s manufacturers really didn’t want to make one that actually could. Imagine all the accidental cuts and ways they could be misused if ever they fell into the wrong hands. But if you’re a prankster, enjoy gags, or regularly purchase the occasional novelty item, then these are for you. 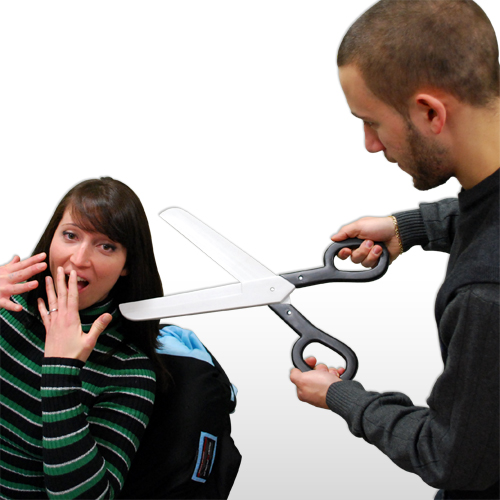 We have to admit these scissors aren’t really all that practical. They don’t cut anything, neither a piece of paper nor a satin sash. Don’t even bother.

However, these giant scissors are incredibly fun. And you can use them to disguise yourself and give someone a good fright.

Don’t be shy, shamelessly threaten your friends with these giant scissors and have a laugh at their reaction.

These Giant Scissors are available from Curiosite for $8.37.

The game Rock Paper Scissors is useful for those who are too indecisive and don’t know where to begin. If you have overwhelming stacks of papers piled up on your desk, organize each of them with these clever Rock Paper Scissors Marking Clips to determine which you will crush, cut, or […]

A while back GeekAlerts introduced you to Scixors, a tiny set of keychain scissors. Now we have our hands on a sample from True Utility, so we’re able to present this SciXors Micro Scissors Review. Measuring just 2¼ by ½ inches when closed, SciXors are […]

When it comes to keychains, some of us geeks pick ones based on their look such as Ghostbusters, Serenity, or Darth Vader, while some of us choose functional key rings such as the GPS Backtrack Homing Device, Spy Camera, or Multi-Function Keyport. The new SciXors […]

Simply plug this USB device into someone’s computer and it’ll turns caps lock on and off, make random mouse movements, type out random text and generally be very annoying.

Some people might not have been very impressed with the Giant Scissors, since they were more of a novelty item rather than something you could actually use to cut up stuff.  If you’re not into pulling pranks and prefer things that were of the more […]

Scissors are an important household item that always seems to go missing. Is it because you really don’t like the pair you have or is it because they don’t standout enough to remember where you placed them? Either way, you won’t have that problem with […]