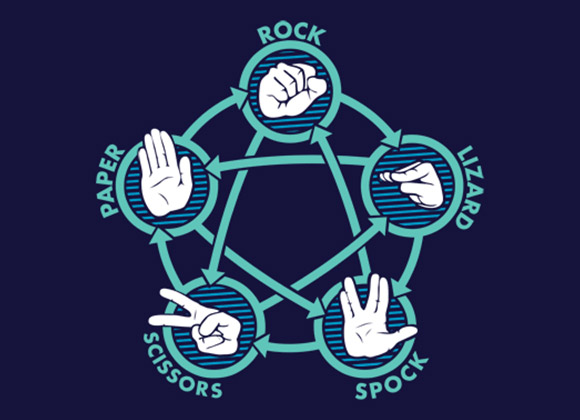 Everyone knows Rock, Paper, Scissors, the simple hand game two people can play. If you watch TV’s The Big Bang Theory, you’re also familiar with the expansion game: Rock, Paper, Scissors, Lizard, Spock. By adding two new weapons, it dramatically reduces the number of rounds that result in a tie. Whether you’re a fan of the show, or simply want a great visual reference to remember what beats what, this Rock Paper Scissors Lizard Spock T-Shirt is for you.

The rules of Rock-paper-scissors-lizard-Spock are:

This Rock Paper Scissors Lizard Spock T-Shirt is brand-new at SnorgTees and is on sale this week for $14.95. Get it now with the $5 discount, or you’ll have to pay $19.95 later.

The game Rock Paper Scissors is useful for those who are too indecisive and don’t know where to begin. If you have overwhelming stacks of papers piled up on your desk, organize each of them with these clever Rock Paper Scissors Marking Clips to determine which you will crush, cut, or […]

A while back GeekAlerts introduced you to Scixors, a tiny set of keychain scissors. Now we have our hands on a sample from True Utility, so we’re able to present this SciXors Micro Scissors Review. Measuring just 2¼ by ½ inches when closed, SciXors are […]

When it comes to keychains, some of us geeks pick ones based on their look such as Ghostbusters, Serenity, or Darth Vader, while some of us choose functional key rings such as the GPS Backtrack Homing Device, Spy Camera, or Multi-Function Keyport. The new SciXors […]

Are you excited about the new Amazing Spider-Man movie? If you are, then  you probably already know that the villain in the film is Dr Curt Connors aka the Lizard. You’ll want to start your action figure collection for this movie with this Amazing Spider-Man […]

There’s just something about huge versions of normal, every day things that makes these objects all the more appealing. Take for example the Giant Doughnut Mold, which you can use to make your own enormous donuts. Or the Big Time Wall Clock which looks like […]

Some people might not have been very impressed with the Giant Scissors, since they were more of a novelty item rather than something you could actually use to cut up stuff.  If you’re not into pulling pranks and prefer things that were of the more […]