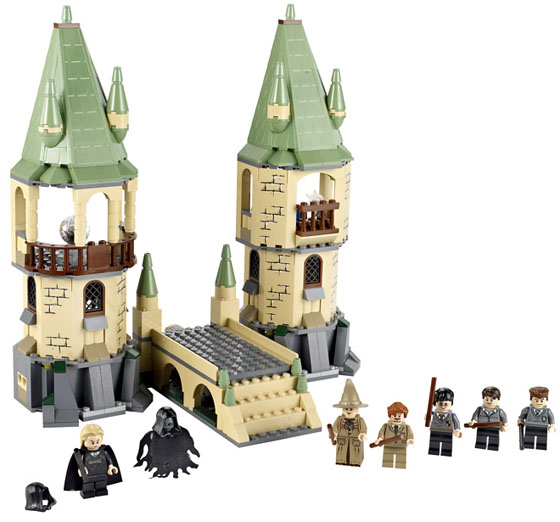 The last installment of the Harry Potter movies is coming and I have to say, as an avid fan, I’ve been waiting for its release since the moment I stepped out of the cinema after watching Harry Potter and the Deathly Hallows Part 1. A lot of loose ends are going to be tied up in the conclusion (for those who didn’t read the book), so this last Harry Potter movie is going to be worth watching; I’m sure of it. However, while we all wait together for the release, why not spend the time by getting the LEGO Harry Potter Battle for Hogwarts set and Harry Potter Knight Bus to indulge your Harry Potter obsession.

Now you can either sulk on your bed waiting or you can have a grand old time re-creating the battle for Hogwarts with this LEGO set. Aside from two towers of the school of witchcraft and wizardry that Harry attends, the set comes with tiny LEGO renditions of your favorite characters from the series.

The Death Eaters have broken through Hogwarts’ defenses and the explosive finale of the Harry Potter saga is about to begin! Take charge of the action with the LEGO Harry Potter Battle for Hogwarts set. Will good finally triumph over evil? Well with Harry Potter, Neville Longbottom, Professor Sprout and Professor Lupin armed and ready at the gates, it’ll certainly be a spectacle! Making their move against Hogwarts in this brilliant set are Gregory Goyle (booo), a Death Eater (hiss) and a Dementor (eeek). Wands at the ready!
Inside Hogwarts Castle you’ll find all sorts of knick knacks and familiar scenes from the Harry Potter series, including theRoom of Requirement, Professor Lupin’s office, theAstronomy Tower, the Divination Room and even the Mirror of Erised.

You can get the Lego Harry Potter Battle for Hogwarts set from Firebox at the enchanting price of £44.99 with free delivery and at Toys R Us for $49.99. Now if only there were some way I could zap a few dollars off the price tag..