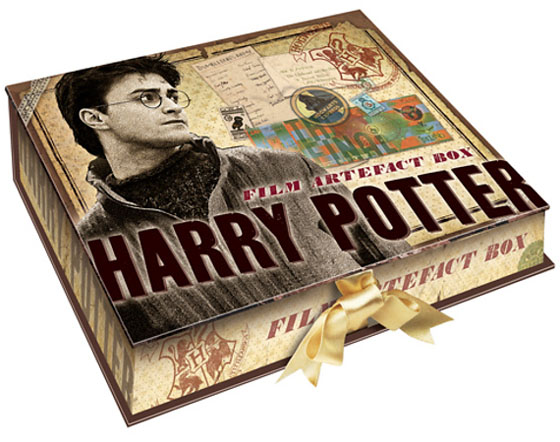 The release date of the last movie in the Harry Potter franchise has come and gone. For hardcore fans, it’s a bittersweet ending to a decade-long journey of waiting for book and movie releases. Celebrate the film franchise’s ending by getting yourself the Harry Potter Artefact Box to remind yourself of the good times that you and your mates have had being a part of the Harry Potter world in real life.

The Harry Potter Artefact Box is truly a must-have, especially for the collectors. The box contains an assortment of memorabilia that fans will recognize from the movies, such as an acceptance letter to Hogwarts, tickets for the Quidditch World Cup, several posters and photos, and much, much more.

Featuring all sorts of high-quality memorabilia from the Harry Potter movies, the Harry Potter Artefact Box is a treasure trove of knick knacks for those in the know. The beautiful presentation box is sealed with a ribbon and features artwork from the Marauder’s Map inside. Open the box and you’ll find choice replicas from Harry’s time at Hogwarts, including (first and foremost) his acceptance letter to Hogwarts. Amongst the bits and pieces you’ll also find his ticket for the Quidditch World Cup, Dumbledore’s Army signature list, Sirius Black Wanted Poster, Order of the Phoenix lenticular photo and much more.

For anyone wanting their own piece of the movie magic, the Harry Potter Artefact Box is a fitting tribute to this much-loved movie franchise. Grab one now, before the train leaves the station for the last time.

This exquisite Harry Potter Quidditch Trunk Crossbody Bag is the perfect handbag for Harry Potter fans. It is a detailed replica of the Hogwarts Quidditch trunk with Hogwarts crest lining, interior zip pocket, gold tone hardware, and a removable strap. Instead of Quaffle, Bludgers, and […]