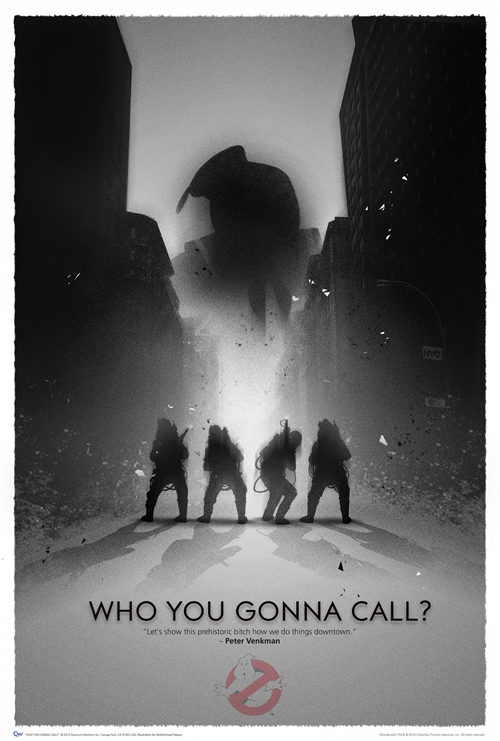 Is there something weird in your neighborhood? The Ghostbusters 30th Anniversary Art Print will remind you of who to call when any supernatural pests start showing up.

On June 1, 1984, Bill Murray, Dan Aykroyd, and Harold Ramis switched on the proton packs for the very first time in Ghostbusters, and that now-classic film gets a stylish poster for its 30th Anniversary.

Along with silhouettes of the ghostbusting team getting ready to take on a shadowy Stay-Puft Marshmallow Man, the 27-inch wide by 40-inch high poster also features the popular “Who you gonna call” tagline and a hilarious quote by Peter Venkman (Bill Murray) – “Let’s show this prehistoric bitch how we do things downtown.”

The Ghostbusters 30th Anniversary Art Print isn’t even available for pre-order yet but you can be one of the first given the opportunity to pre-order by getting on the waiting list at QMXOnline.com. The poster will sell for $19.95.

You’ll want to grab your stick and heat em up when you’re looking at the Ghostbusters Art Prints hanging on your wall. Everything old is new again as Ghostbusters celebrates its 30th anniversary, making it a perfect time to go retro with your wall decorations. The […]

The Predator 30th Anniversary 7-Inch Action Figure Set is what Predator fans have been waiting for. Now you can recreate all of your favorite scenes from the movie. Get to da choppa! And get this set into your collection today. These special action figures celebrate […]

It’s hard to believe that it has been 30 years since The Empire Strikes Back was released. I guess we should celebrate with this Empire Strikes Back 30th Anniversary Playing Cards set. Card games are always much better with Star Wars characters on them. You […]