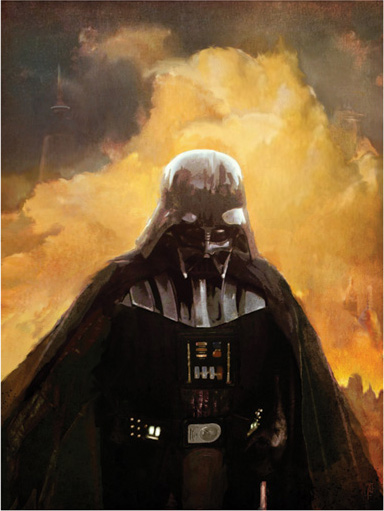 The Empire 30th Anniversary Artwork Collection is a series of 12 scenes, each by a different artist. This scene with Darth Vader is #12 in the series, and is thus the final installment. This piece of art is a giclee on watercolor paper and is a limited edition of only 100. Each is signed by hand and individually numbered.

Each print in this artwork series showcases a memorable scene from Star Wars Episode V – The Empire Strikes Back. It is part of a year long 30th anniversary celebration that started in March 2010 and concludes with this release of Empire 30th Anniversary Artwork Collection #12 by Paul Ballard.

The final entry in the series, “The Departure” by Paul Allan Ballard, captures an unseen moment near the close of The Empire Strikes Back in which Vader is leaving Cloud City — and the uncertain fate of his son — behind.

It’s hard to believe that it has been 30 years since The Empire Strikes Back was released. I guess we should celebrate with this Empire Strikes Back 30th Anniversary Playing Cards set. Card games are always much better with Star Wars characters on them. You […]

If you love Star Wars, you won’t be satisfied with hanging any old posters on your wall. You want Fine Star Wars Artwork, like that available from KULT Studio. There are over 60 different Star Wars pieces, and a wide variety of styles are showcased. […]