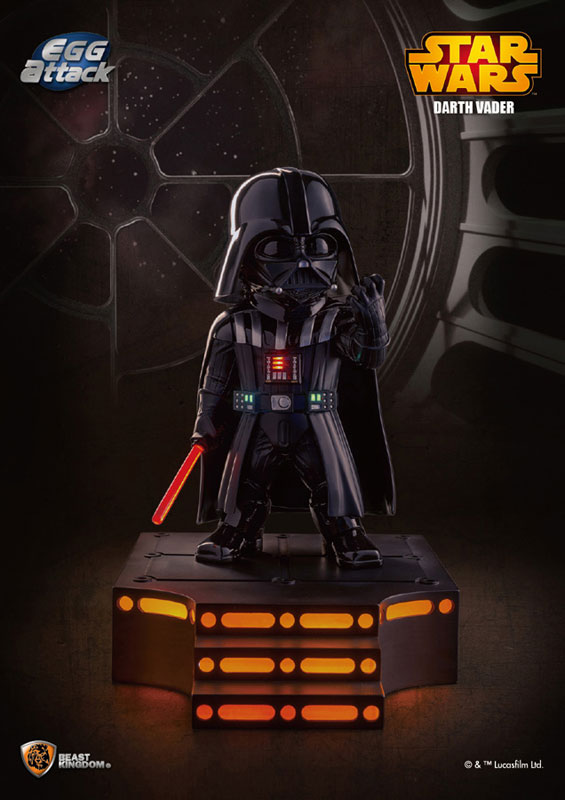 Am I the only one who thinks of the little Sith Lord from the Volkswagen commercial when looking at this Star Wars Epidode V The Empire Strikes Back Darth Vader Egg Attack Statue?

Aren’t you a little short to be a Sith? Darth Vader isn’t as menacing as he used to be on this 8-inch-tall statue, but he’s still impressive. The figure has cool detailing that really makes the armor and clothing stand out, with light effects adding a visual wow factor with a belt, chestpiece, and lightsaber that light up. The base, designed to look like the carbon freezing chamber in Empire Strikes Back also lights up.

If those things weren’t awesome enough, Vader’s helmet even comes off, revealing the circuits on the top of his mask.

The Star Wars Epidode V The Empire Strikes Back Darth Vader Egg Attack Statue will be available August 2015 but it can be pre-ordered now for $174.99 at Entertainment Earth.

This Star Wars: Episode V – The Empire Strikes Back Darth Vader Egg Attack Figure is pretty adorable. It makes the fearsome Vader a little less fearsome, but no less awesome. He has 21 points of articulation and is made with compound material. The figure […]

The Star Wars R2-D2 and C-3PO Egg Attack Statues are the droids you’re looking for if you’re a fan of the fussy protocol droid and his faithful, ever-reliable, astromech partner. Standing 5-inches and 6-inches tall, respectively, R2-D2 and C-3PO are ready to light up your […]