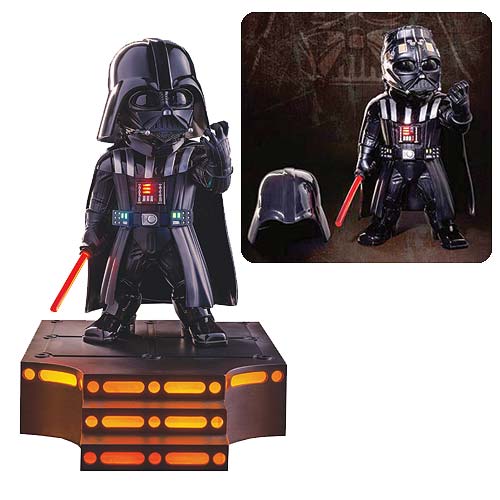 This Star Wars: Episode V – The Empire Strikes Back Darth Vader Egg Attack Figure is pretty adorable. It makes the fearsome Vader a little less fearsome, but no less awesome.

He has 21 points of articulation and is made with compound material. The figure is also painted with expert technique, perfectly capturing the texture of Darth Vader’s armor and clothing. Each Egg Attack Action Darth Vader comes with bonus parts including a posing stand, interchangeable hands and of course, the red lightsaber. This figure will display awesome.

$149.99 from Entertainment Earth. You can pre-order it now and it will ship in February.

The Star Wars Rogue One Darth Vader Egg Attack Action Figure depicts Lord Vader as seen in the Rogue One: A Star Wars Story. He has his LED light-emitting device on the chest and familiar breathing sound too. The details are great, like the fact […]

This Star Wars Rogue One Darth Vader Egg Attack Action Figure depicts the Sith Lord as seen in Rogue One. He has his LED light-emitting device on the chest and that familiar breathing sound! The cape and vest are made with real fabrics and it […]

Come to the Dark Side because we have the Darth Vader Sixth-Scale Figure. Standing almost 14-inches-tall, the Dark Lord of the Sith has over 30 points of articulation, features sound effects of Vader’s breathing, and comes with a LED-lighted red lightsaber, interchangeable hands, and plenty […]