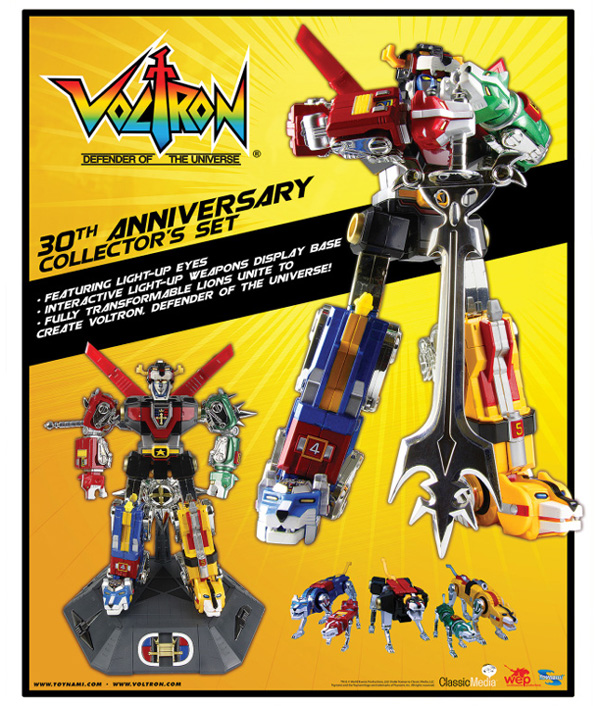 For thirty years, five robotic lions have come together to form the giant Defender of the Universe known as Voltron, and this highly-detailed action figure provides everything you need to relive those classic adventures, as well as create new adventures that have only existed in your imagination.

The die-cast metal action figure set includes the Blue, Red, Black, Green, and Yellow Lions, and just like in the comic books and animated television show, the Lions join together to form Voltron. The only difference is this Voltron is only 11-inches tall instead of being as big as a skyscraper.

Along with the action figure, the set also includes the lion’s mouth blade and a special Voltron badge that becomes a key that can be used to activate light and sound effects – including a lion’s roar – on the display base.

The Voltron 30th Anniversary Die-Cast Light-Up Action Figure with Sound Collectors Set will be available February 2014 but it can be pre-ordered now for $224.99 at Entertainment Earth.

You might feel like you’re wearing an action figure when you slip into the Deluxe Voltron Costume Hoodie because it looks like the robot lions combined to form a version of Voltron that has you as the main pilot. Is there anyone who grew up […]

This Voltron Ultimate Edition EX 16-Inch Action Figure is a must for your collection! He stands 16-inches tall and all 5 lions come apart with multiple points of articulation! This is the Voltron you have been waiting for. The 5 lions will form Voltron, and […]