Since the television series is over, you will soon be able to get the complete Game of Thrones on Blu-ray. The high-end option is the limited edition Game of Thrones: The Complete Collection. It features amazing packaging and exclusive content.

While the pictures here don’t do it justice, the Game of Thrones: The Complete Collection is packaged in a stunning shadow box case made of wood. It features beautiful, multi-layered panel designs that summarize the story, with each layer being a different season of the show. A “Hand of the King” pin clasp keeps the set closed. 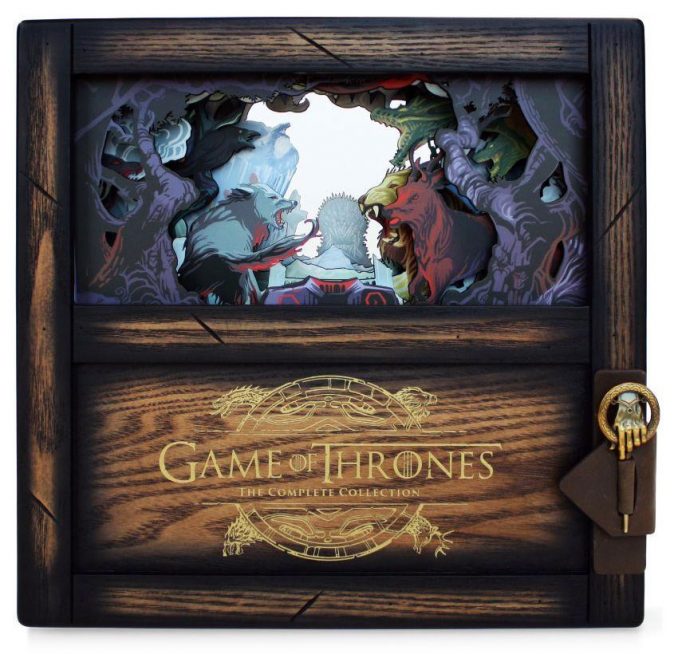 This must-have collectible exclusively features Game of Thrones: Reunion Special, a two-part reunion show with cast members from the final season including Kit Harington, Emilia Clarke, Sophie Turner and more, as well as previously departed fan-favorites like Sean Bean, Jason Momoa, Mark Addy and others. Hosted by Emmy-award winning host Conan O’Brien, the reunion was shot in front of a live audience in Belfast and includes segments of footage from both the show and behind-the-scenes, highlighting a variety of topics that are sure to captivate fans.

Game of Thrones: The Complete Collection is packaged in a visually stunning wooden shadow box case, featuring beautiful, multi-layered panel designs by Robert Ball (the artist behind the “Beautiful Death” series) that summarize the Game of Thrones story. Each season is represented by a different layer, showcasing iconic characters and memorable moments from the show, all clambering toward the Iron Throne. The set also contains a “Hand of the King” pin clasp, which holds all nine custom plated disc sleeves.

Based on the best-selling novel series by George R.R. Martin, Game of Thrones holds the record as the most awarded series in television history, earning a total of 132 Emmy nominations and 47 wins to date. The megahit drama also stands as HBO’s most-viewed program ever, with the final season averaging a record-setting 44 million viewers in the U.S.

Pre-order the Game of Thrones: The Complete Collection for $329.99 directly from the HBO Shop. It will ship on December 3, 2019.