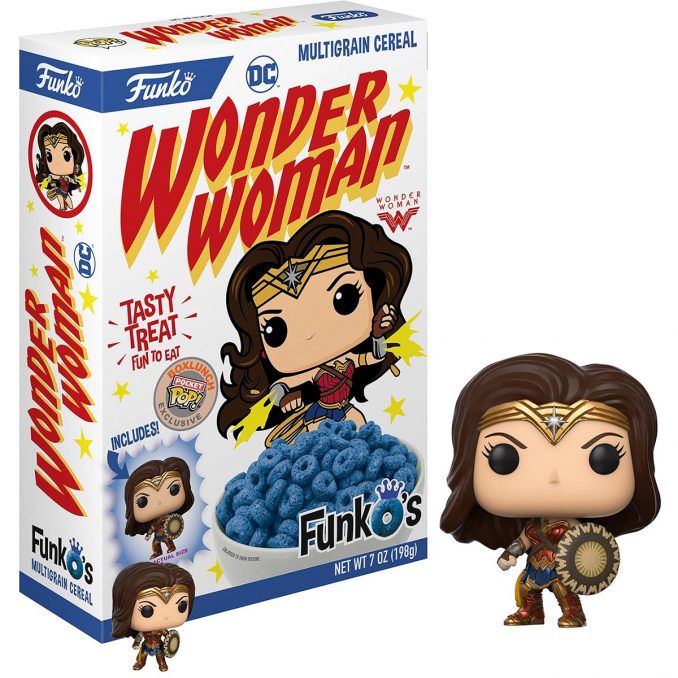 Just like FunkO’s Batgirl Cereal, FunkO’s Wonder Woman Cereal with Pocket Pop! is a tasty breakfast cereal that comes with a bonus prize of a mini Funko vinyl figure. In this case, the cereal is blue multi-grain, and the Pocket Pop! is of Wonder Woman.

While the cereal is made in the USA, the Wonder Woman figure is, of course, imported. It is made of vinyl and stands about 1.5″ tall, which is less than half as tall as the typical Funko Pop! vinyl figure.

Thought you had seen it all from Funko? Well think again. Introducing FunkO’s, the new collectible cereal from the pop culture wizards at Funko. Each box comes with a Pocket Pop! of one the characters.

This DC Comics Wonder Woman box of FunkO’s comes with a Wonder Woman Pocket Pop!, and the blue, multigrain cereal is bound to wow you at breakfast time. That’s if you decide to eat it and not keep it intact with your Funko collection! Grab a box today and make your Saturday mornings fun again.

FunkO’s Wonder Woman Cereal with Pocket Pop! is a BoxLunch exclusive, where it retails for $10.90.

When most people think of Funko, they think of the adorable vinyl figures, not breakfast cereal. FunkO’s Beetlejuice Cereal with Pocket Pop! is a tasty multigrain cereal. The key with FunkO’s cereal is they come with a prize inside, in this case, a Pocket Pop! […]

As you probably already know from the FunkO’s Beetlejuice Cereal, Funko has a line of breakfast cereals that come with mini vinyl figures. The latest is FunkO’s Batgirl Cereal with Pocket Pop!, which features purple multigrain cereal and an exclusive Batgirl Pocket Pop! mini-figure. Even […]

These WTF Prank Candles start like normal scented candles, offering a delicious scent to make the whole room smell nice. However, after an hour or two of burning, they suddenly switch to an awful putrid odor. The prankee will have no idea what hit them. […]