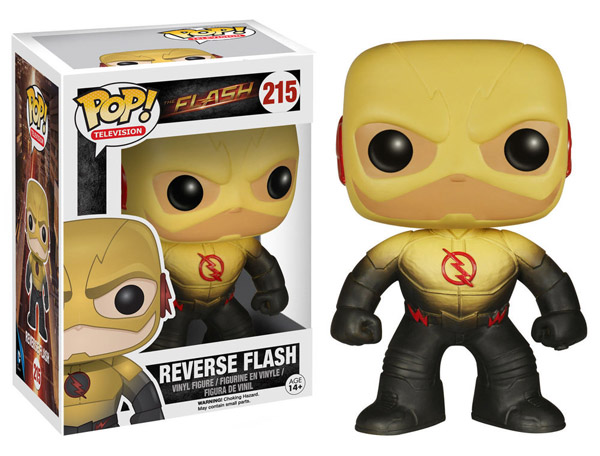 One of the fastest men in the DC Universe is now available as the Flash TV Series Reverse Flash Pop! Vinyl Figure, which means Funko was able to finally catch the speedster. Sadly, that’s not something Barry Allen is skilled enough to do just yet.

Did I reveal a spoiler? Hmmm. You have to remember the Man in the Yellow Suit handed Wells a serious beat-down so there’s still plenty of mystery to unravel.

The Flash TV Series Reverse Flash Pop! Vinyl Figure will be available May 2015 but it can be pre-ordered now for $9.99 at Entertainment Earth.

Eobard Thawne races into your room, your life, your very heart, with the Flash TV Series Reverse Flash ArtFX+ Statue. Standing approximately 6 1/2-inches tall, this highly-detailed statue is based on Barry Allen’s arch-nemesis, the Man In The Yellow Suit AKA Reverse-Flash. In addition to […]

Look! Up in the sky! It’s… well, it’s nothing because he can’t fly but the Flash TV Series Pop! Vinyl Figure features a character that can do a lot of other nifty things with super-speed. Grant Gustin has won the hearts of geeks everywhere as […]