Did you survive a week at Freddy Fazbear’s Pizza? Then you deserve the Five Nights at Freddy’s ‘Celebrate’ T-Shirt.

There’s nothing boring about the night-shift security position in this popular horror video game because you spend your nights making sure the roaming animatronic animal characters don’t catch you and stuff you into a spare mechanical Freddy Fazbear costume… which results in your death. And don’t get any macho ideas about blowing the freaky robots away with a shotgun or anything because you’re not even armed with a flashlight to whack them with. All you can do is close the doors and turn on lights.

The tee features Bonnie the Bunny, Chica the Chicken, Foxy the Pirate Fox, and Freddy Fazbear himself. 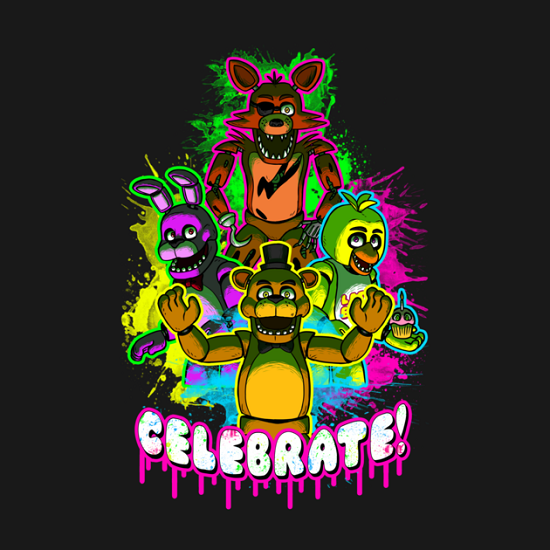 The Five Nights at Freddy’s ‘Celebrate’ T-Shirt is available for $20 at Tee Public.

. The Five Nights at Freddy’s Mini FrightLight Projector Keychains project a light-up image of the animatronics from everyone’s favorite pizza place. This is scary stuff. You can get Bonnie, Chica, Foxy, and Freddy. They are blind-bagged so you never know which you are going […]

If you’re looking for a fun diversion or a little stress relief, you need to check out the Whack-A-Mole Game Keychain. It is an electronic version of the whack-a-mole games from arcades and carnivals. Instead of whacking moles that pop up with a hammer, in […]

We’ve shown you Shotgun Shell Styled Party Lights before; but since it’s December 2012 and everyone has Christmas and apocalypse survival on their minds, we thought it was okay to show you another fun set. The Real Shotgun Shell Christmas Lights are a neat way […]