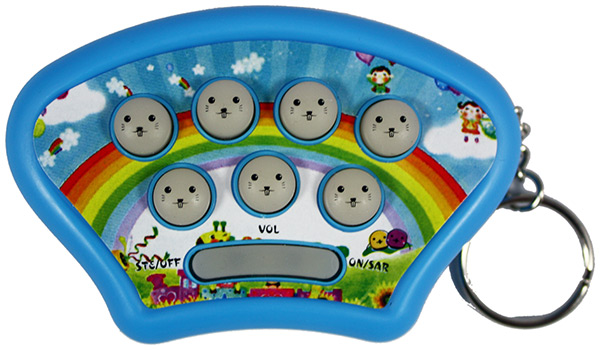 If you’re looking for a fun diversion or a little stress relief, you need to check out the Whack-A-Mole Game Keychain. It is an electronic version of the whack-a-mole games from arcades and carnivals. Instead of whacking moles that pop up with a hammer, in the electronic game you press the buttons after they light up. As you pass each level, the game gets faster and faster, making it more challenging and exercising your hand-eye coordination.

ToyGadgets.com actually sent us one of these electronic whackamole games to review, which is how we were able to capture the pictures here. As we often do in our reviews, we took a picture with a Lego minifigure (in this case Yoda) in order to show the relative size of the item. 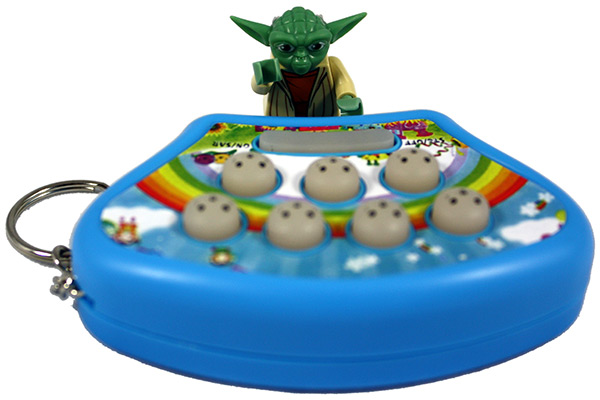 This keychain game works as you would expect. Although the case is plain, ordinary plastic, the buttons are silicone and have a nice feel. The voice feedback isn’t in English, so it can be tricky to figure out the controls such as muting the sound or starting a new game. Actually playing the game is a bit of fun for a while, but I’m not about to give up my iPhone.

I think the game would be great for young kids. Toddlers want to grab your smartphone, but they could easily break it and the games/controls are a bit too complex for them to figure out. This game is much easier, and the lights and sounds will keep kids enthralled. This is durable enough that it won’t break if they throw it, bite it, or drop it, and even if they did it is much less costly than replacing a smartphone.

For a low cost diversion that can keep little kids occupied, the mini whack it game delivers. Order the Whack-A-Mole Stress Relieving Game Keychain for $7.40 from ToyGadgets.com.

Have you ever played Whac-A-Mole at arcades, carnivals, or amusement parks? Well now you can enjoy the exciting action at home with the Whac-A-Mole Arcade Game. It really is simple: just watch for moles to light up and then whack them with your mallet. You […]

Remember the classic Whac-A-Mole games you’d see at amusement parks and carnivals? Did you ever feel bad about popping the poor innocent moles? The Personalized Whac-A-Mole Game lets you get personal with that big ol’ padded mallet. Designed to look like an innocent bookshelf when […]

In the mood to whack some moles but can’t find the time to drop by your arcade? No worries if you’ve got the USB Whack It game that’s literally plug-and-play.

It pays to take the extra mile nowadays to keep your valuables safe. I mean, you never know when crooks might come thieving in your home or office. Joining the ranks of the Spy Bolt Covert Secret Container, Electrical Outlet Hidden Wall Safe, and the […]

For all you Star Wars and keychain fans out there,the R2-D2 LED Light Keychain is a perfect addition to the Lightsaber Keychain, LEGO Minifigure Keychain and Tardis Keychain.  R2-D2 has always been a fan favorite and now you can carry him with you at all […]

Fans of fertility, procreation, and gag gifts, have we got the keychain for you. Some people get freaked out by the sight of ultrasound photos posted on Facebook, but that’s nothing compared to the looks of this Pregnant Woman Keychain with Fetus. Not only is the […]