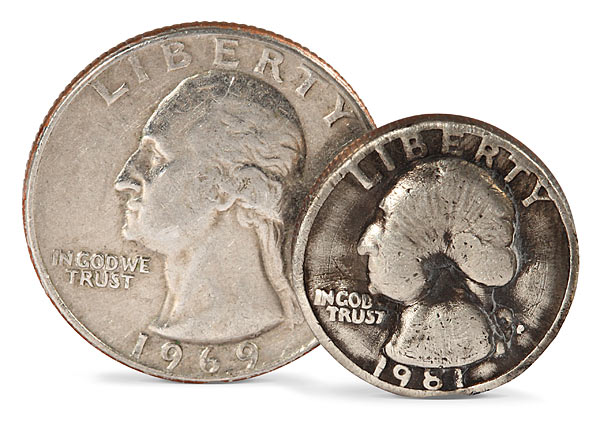 Electromagnetically shrunken quarters are the coolest science product of this decade.  That’s ten years’ worth of science products that aren’t as cool as these quarters.  What happens when you take a quarter and then zap it with a couple hundred thousand amps?  YOU GET ELECTROMAGNETICALLY SHRUNKEN QUARTERS!  “Why is your hair standing up?”  Because I’m going to “shock” you with the powers of science.  *Rubs feet furiously on the carpet to build static electricity*

Yes, you may feel like you’re being duped – you’re sending ThinkGeek $25 in order to receive $.50.  (One shrunken quarter and one real quarter.)  But, that’s okay, because it’s science!  Also, a great conversation starter on dates.  “So, how was your day?”  Well, I spent most of my daily breadwinning money on some electromagnetically shrunken quarters that should be arriving in about a week.  How was your day?  “We’re no longer dating.”

If you want to pick up one of these crazy pieces of science for just $24.99, then head on over to ThinkGeek.  If you’re still hungry for more geeky things, then check out the Science Silicone Ice Cube Tray and the Mr. Spock With Science Console Statue.

Having a hard time getting out of bed? Think your alarm clock was made to drive you nuts every morning? (Although I doubt you’ll feel this way if you had either the Dynamite Alarm Clock or the Laser Target Alarm Clock.) If you’re looking for […]

Have you ever been to a party that was on the dull side, where one of the guests or hosts decides to pipe up with a corny (and sometimes over-used) joke to try to break the ice? A few feeble laughs are usually generated but […]

Do you ever find yourself in a situation where you need to get a fire started quickly?  We don’t mean would-be arsons but other individuals who may be out on some camping trip or expedition in the great outdoors. For that, all you need is […]

He doesn’t actually dance but the Little Groot Quarter-Scale Figure looks incredibly realistic, and he can be posed in a variety of ways. Groot was cool in Guardians of the Galaxy but baby Groot stole the whole show at the end of the film, which […]