He doesn’t actually dance but the Little Groot Quarter-Scale Figure looks incredibly realistic, and he can be posed in a variety of ways.

Groot was cool in Guardians of the Galaxy but baby Groot stole the whole show at the end of the film, which isn’t bad for a character that only appeared on screen for a couple of minutes.

The movie-accurate, 4.75-inch-tall character has a special paint application to create his unique look, as well as three interchangeable head sculpts, and moveable arms and body that make it easy to recreate the scene where he jams to the Jackson 5’s ‘I Want You Back.’ 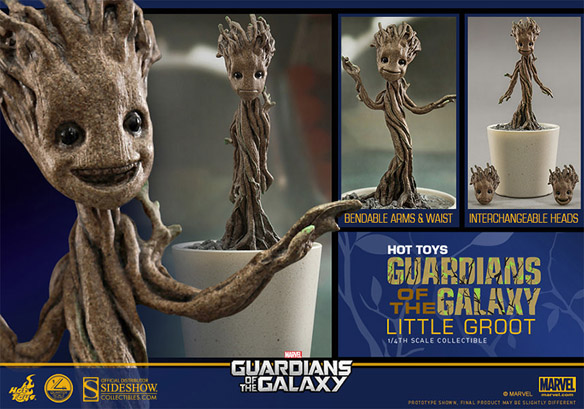 The Little Groot Quarter-Scale Figure will be available January 2015 but it can be pre-ordered now for $44.99 at Sideshow Collectibles.

Baby Groot is super-cute and the Guardians of the Galaxy Baby Groot Silver Ring lets you easily keep the little guy with you all the time. Okay, you love little Groot and would love to keep him by your side twenty-four hours a day but […]

Get ready to lose the battle with your willpower because the cutest walking, talking tree can now come home with you thanks to the Guardians of the Galaxy Baby Groot Life-Size Figure. You got excited enough to cheer for the little guy when he started […]

The Guardians of the Galaxy Groot Crossbody Bag is a great way to honor Baby Groot and carry all of your stuff at the same time. Isn’t he adorable? Baby Groot is ready to hold all your belongings. Making it extra cute, it also features […]

The Iron Man Mark II Quarter-Scale Maquette allows fans to add Tony Stark’s first hi-tech armored suit to their collection. Stark’s first armored battle took place with him wearing the Mark I, which was awesome to see in action but a guy like Tony Stark […]