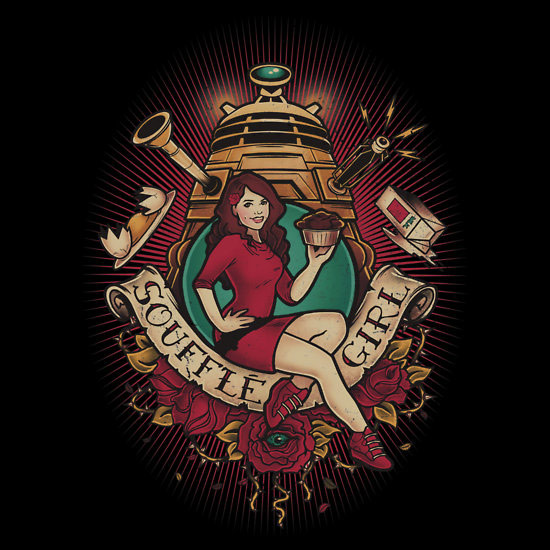 The Doctor got a taste of his own medicine when he met three versions of his current Companion, Clara Oswald, and the Doctor Who Soufflé Girl T-Shirt memorializes the first incarnation we encounter… who also happens to be my favorite.

Before she became the Impossible Girl, she was simply the Soufflé Girl, a mysterious woman named Oswin who immediately stole our hearts with her witty banter. We were ready to welcome this new person with open arms as the Doctor’s new Companion, and cursed Moffat when we discovered that we had been tricked. No offense, Clara, you’re cool, but you’re no Oswin.

The American Apparel t-shirt features Oswin with the important symbols of the episode she appeared in, with the eggs and milk emphasizing her Soufflé Girl moniker, even as the giant Dalek in the background hints at her ultimate fate. 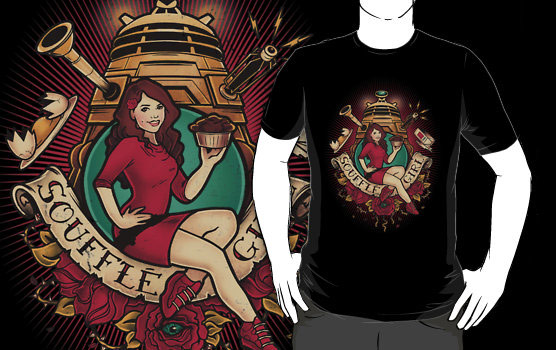 The Doctor Who Soufflé Girl T-Shirt is available for $25.97 at RedBubble.com.

The meeting that never happened on the television show can now take place with the Doctor Who The Impossible Action Figure 2-Pack, which includes everybody’s favorite Time Lord and a girl that looks a lot like Clara Oswald. Before the Doctor met Clara Oswald, he […]

If you have been watching Doctor Who recently, you’ll recognize this Doctor Who Canvas Print: Clara Painting. This amazing canvas print recreates the Doctor’s painting of Clara from the episode ‘The Bells of Saint John.’ She’s an impossible woman. She shouldn’t exist. What is the […]

Doctor Who Doctor and Companion Rings

The Doctor Who Doctor and Companion Rings give both you and your companion matching rings, because it’s what BFFs do. Choose from either the Doctor or a Companion. You can get each in whole sizes 6-11. The lettering is engraved in TARDIS blue. These are […]

It’s warmer on the inside! This Doctor Who Gallifreyan Symbols Blanket is super soft and snuggly and measures 50″ x 60″. This blanket is full of Gallifreyan symbols from the Doctor’s home planet. It will keep you warm and cozy no matter what planet you […]

The Doctor’s face and personality might change but it’s his Companions that really add spice to his adventures because each one brings something new to his life, and the Doctor Who Companions T-Shirt lets the Time Lord take a break while we focus on the […]