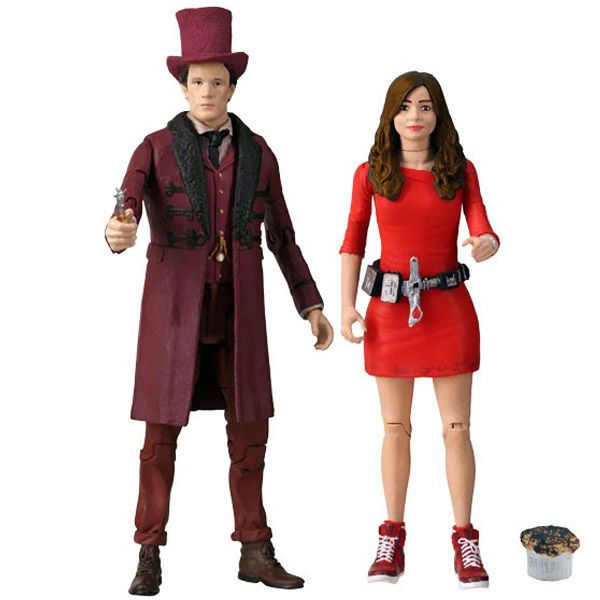 The meeting that never happened on the television show can now take place with the Doctor Who The Impossible Action Figure 2-Pack, which includes everybody’s favorite Time Lord and a girl that looks a lot like Clara Oswald.

Before the Doctor met Clara Oswald, he encountered Oswin Oswald, who managed to help the Time Lord escape a very bad place, despite her… unique situation. Later, the Doctor learned that he could still be mystified when he encountered what appeared to be a reincarnation of the Souffle Girl and he vowed to discover the secret of the Impossible Girl.

This 2-pack features an action figure of the Doctor as he appeared in the episode, ‘The Snowmen,’ wearing his Victorian frock coat and top hat, along with Oswin Oswald from ‘Asylum of the Daleks,’ wearing a red dress and a souffle-making accessory belt, which allows her to make the culinary treat without eggs or milk. She even has a little burned souffle… because she’s honestly not that good at making them, even in her imagination.

The Doctor Who The Impossible Action Figure 2-Pack is available for $39.99 at Entertainment Earth. Also at Amazon.com.

The Doctor got a taste of his own medicine when he met three versions of his current Companion, Clara Oswald, and the Doctor Who Soufflé Girl T-Shirt memorializes the first incarnation we encounter… who also happens to be my favorite. Before she became the Impossible […]

If you want some Doctor Who love with maybe just a bit of M.C. Escher-style artistic flair thrown in, you’ll love the Doctor Who Impossible Call Box T-Shirt. The black, 100% combed ringspun cotton t-shirt features the iconic TARDIS after what appears to be a […]

Still think that the Doctor should be a woman? Make it happen with this Doctor Who Ladies’ 11th Doctor’s Purple Coat. Purses are cool! This is the eleventh Doctor’s frock coat made for the ladies. It is a tweed cashmere / wool blend and looks […]

The best thing about FOX’s Gotham has been arrested and is being held in custody on the DC Comics Gotham Oswald Mugshot T-Shirt. I’ll admit it. I’m not a fan of Gotham. I could easily do without the adventures of Baby Batman, Baby Catwoman, Baby […]

Gotham City is the place where justice is born on the Gotham Oswald Justice Silhouette T-Shirt, but don’t expect Oswald Cobblepot to be close friends with justice. He’s not a criminal… but he is insane. The man known as the Penguin strikes a pose on […]