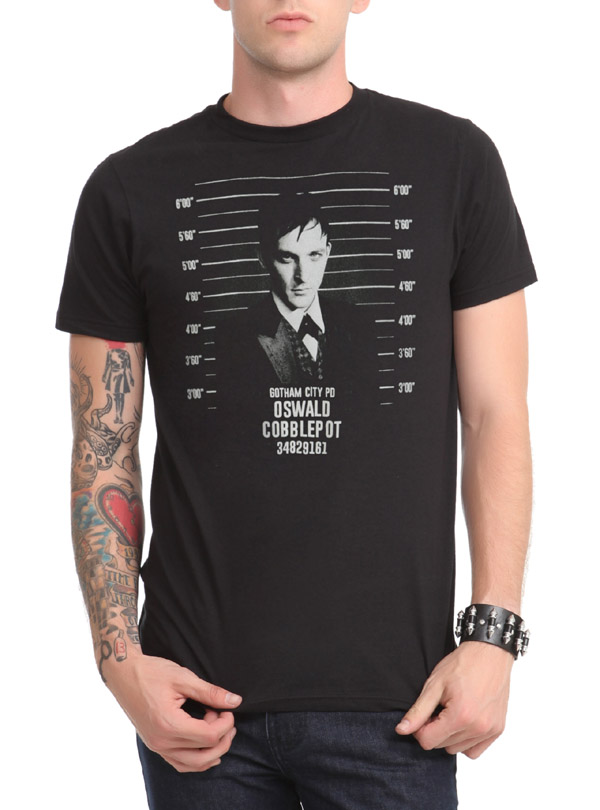 The best thing about FOX’s Gotham has been arrested and is being held in custody on the DC Comics Gotham Oswald Mugshot T-Shirt.

I’ll admit it. I’m not a fan of Gotham. I could easily do without the adventures of Baby Batman, Baby Catwoman, Baby Poison Ivy, and the Only Honest Cop in Gotham AKA James Gordon. However, Oswald Cobblepot, who is finally coming to accept his Penguin nickname, is insanely awesome… with heavy emphasis on the insane part. I mean the guy has killed for a sandwich. That’s pretty hardcore. He also has no problem with spying on and snitching on the big names in the underworld. He’s the ‘wimp’ who will kill you with a blade while you’re busy laughing at him. 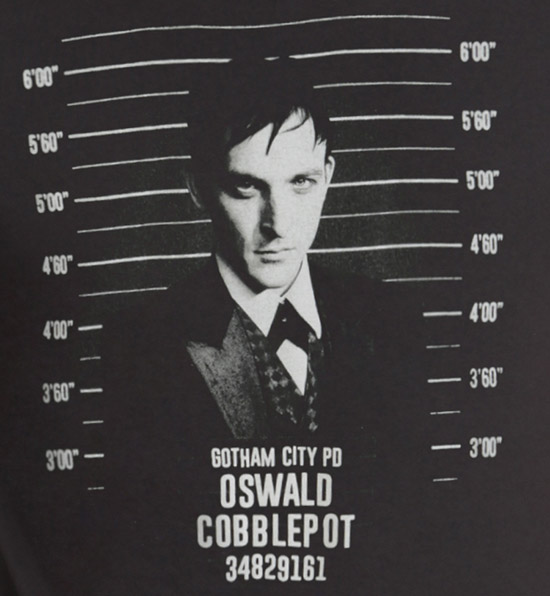 The DC Comics Gotham Oswald Mugshot T-Shirt is available for $16.40 at Hot Topic, and if you see him hanging around, just give the guy your sandwich. You’ll probably be happier for doing it.

Gotham City is the place where justice is born on the Gotham Oswald Justice Silhouette T-Shirt, but don’t expect Oswald Cobblepot to be close friends with justice. He’s not a criminal… but he is insane. The man known as the Penguin strikes a pose on […]

Your collection is simply not complete without this cool Batman Harley Quinn Mugshot Bust. This bust depicts the Joker’s partner after she has been captured by Gotham City PD. Oh man. I guess Mitah J is going to have to bust her out. The base […]

This Batman Joker Mugshot Bust shows The Clown Prince of Crime looking crazy as ever, during his latest arrest by Gotham’s finest. The Joker bust measures about 6 1/2-inches tall and comes with an individually numbered certificate of authenticity. He’ll be back out on the […]

Everything’s starting to be manufactured in cans these days. Aside from preserving food stuff for an extended period of time, it’s also portable and makes for easy carrying. And to add to your list which might already include the Tactical Canned Bacon, there’s the Candwich Canned […]