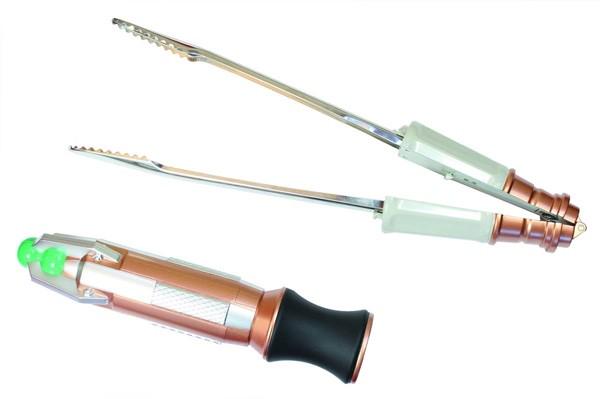 The Doctor’s iconic tool has been upgraded with the Doctor Who Sonic Screwdriver BBQ Tongs.

Handy in almost any situation, the Doctor’s sonic screwdriver has always had two major weaknesses. It couldn’t work on wood or barbecue. Wood is still a problem but you can now call yourself a BBQ Lord with these nifty tongs. Officially-licensed and measuring 22 1/2-inches-long, the tongs feature a heatproof plastic handle and storage case that looks like the sonic screwdriver used by both the Eleventh and Twelfth Doctors. It even makes the iconic sonic screwdriver sound effect that all Whovians recognize.

The Doctor Who Sonic Screwdriver BBQ Tongs will be available October 2015 but they can be pre-ordered now for $39.99 at Entertainment Earth. Also at Amazon.com.

With all the innovative cooking utensils that are available, it’s still common to see Asian moms (and dads) stirring food over the stovetop with a pair of chopsticks. Old habits die hard, and there’s no need to reinvent the wheel. However, tongs come close to (or exceed) the […]

Will the Force be with you when you’re at the grill this summer? That depends on whether you’re wielding the Star Wars Lightsaber BBQ Tongs or not. Get in touch with the Dark Side as you slap a wide variety of flesh onto the flames. […]