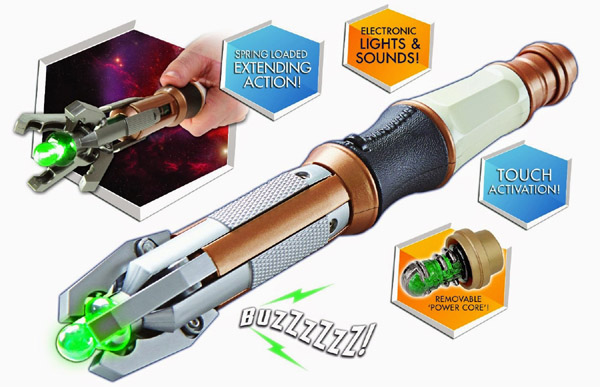 A new Doctor usually (but not always) means a new sonic screwdriver and the Doctor Who Twelfth Doctor’s Touch Control Sonic Screwdriver Replica has arrived so Whovians can now imagine themselves as Peter Capaldi’s Twelfth Doctor.

At first glance, the powerful tool wielded by the new Doctor seems to be the same one used by Matt Smith’s Eleventh Doctor, so there’s a good chance it’s the same one, especially since no mention has been made of him upgrading the iconic tool. Still, it’s in the hands of Peter Capaldi now so it’s the Twelfth Doctor’s screwdriver.

One of the interesting things about this replica is that there are no buttons to push. Just hold your index finger against the lower side of the control collar and touch your thumb to the top surface to activate both sound and light effects, which operate in both closed and extended positions. Also, it’s possible to remove the power core.

The Doctor Who Twelfth Doctor’s Touch Control Sonic Screwdriver Replica is available for $29.99 at Entertainment Earth. It’s also available for £16.99 at Forbiddenplanet.co.uk.

The mad man in the box has a new flashy thing, and that means it’s time for the Doctor Who Twelfth Doctor’s Sonic Screwdriver Replica. It’s been a long time coming but patience has finally paid off. First, the Twelfth Doctor was content with using […]