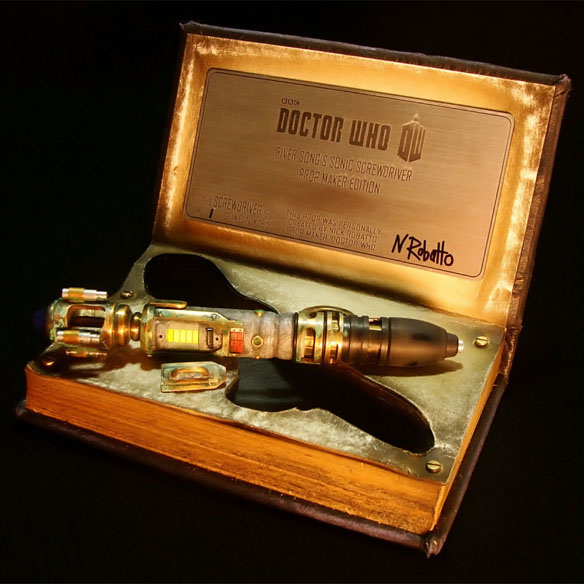 Get ready to be totally blown away Doctor Who fans. 15 lucky people will need to be quick to get their hands on River Song’s Sonic Screwdriver – Artisan Master Series prop replica, and those 15 people will have bragging rights until the day the Doctor is unable to save the universe from disaster.

When we first met River Song, in Silence in the Library, she immediately let us know she was someone important by revealing that she had a sonic screwdriver that was even more advanced than the one being used by David Tennant’s Doctor. According to her, it was so advanced because the Doctor’s future self had given her his sonic screwdriver. Now, you can own a replica of that iconic piece of Who history, and you won’t believe all the Whovian goodness that will wind up in your possession.

Along with the special edition sonic screwdriver itself, which has been handmade by Doctor Who Prop Maker Nick Robatto, you also get a River Song diary prop replica, which contains a certificate of authenticity with the edition number and Nick Robatto’s signature. It all comes packaged in a handmade wooden chest that features the Doctor Who logo.

It’s an incredible piece of Who geekiness but you’ll pay for the privilege of calling this little jewel your own. River Song’s Sonic Screwdriver – Artisan Master Series can be yours for $3,499.99. You can get on the waiting list at QMX Online right now. Waiting List customers will get first chance to pre-order. Pre-ordering will start in Q1, 2013.

(via The Mary Sue)