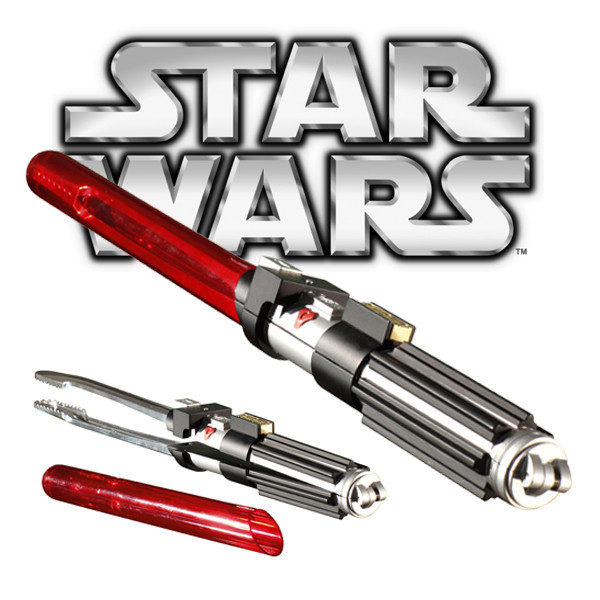 Will the Force be with you when you’re at the grill this summer? That depends on whether you’re wielding the Star Wars Lightsaber BBQ Tongs or not. Get in touch with the Dark Side as you slap a wide variety of flesh onto the flames.

These officially-licensed Star Wars tongs are modeled after the lightsaber wielded by Darth Vader, complete with lightsaber sound effects. When the tongs aren’t being used by a Sith Lord of the BBQ, a removable transparent red cover completes the lightsaber look… although it admittedly looks like a very short and stubby lightsaber.

The Star Wars Lightsaber BBQ Tongs will be available in early April but they can be pre-ordered now for £19.99 / $33.44 at The Fowndry.

With all the innovative cooking utensils that are available, it’s still common to see Asian moms (and dads) stirring food over the stovetop with a pair of chopsticks. Old habits die hard, and there’s no need to reinvent the wheel. However, tongs come close to (or exceed) the […]

The Doctor’s iconic tool has been upgraded with the Doctor Who Sonic Screwdriver BBQ Tongs. Handy in almost any situation, the Doctor’s sonic screwdriver has always had two major weaknesses. It couldn’t work on wood or barbecue. Wood is still a problem but you can […]

Let’s say you want to slap a little meat on the fire and the day starts to turn to night faster than you had planned, or you just want to set up the pit in the shade so the sun isn’t blasting down on you. […]

It is always summer somewhere; for those of you lucky enough to be in a warm climate, get outside, get those barbeques fired up, and enjoy some Rock & Roll with the BBQ Guitar Spatula. This stainless steel spatula has an etched design with a […]