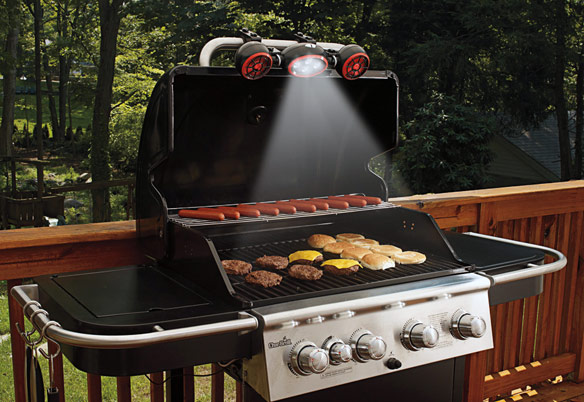 Let’s say you want to slap a little meat on the fire and the day starts to turn to night faster than you had planned, or you just want to set up the pit in the shade so the sun isn’t blasting down on you. The BBQ Grill Light and Fan lets you keep a little light on the subject, no matter how dark the rest of the world gets.

You’re a hi-tech BBQ geek with a black belt in choice cuts and tasty rubs, armed with nifty grilling goodies like the Tactical BBQ Apron, Ninja BBQ Set, and the Grillbot, but none of this cool gear helps with lighting or keeping you cool as you stand over an open fire.

Fortunately, this little accessory, which works with virtually any hood (except Kettle style hoods), has arrived to make your BBQ adventure a little brighter and a little cooler. 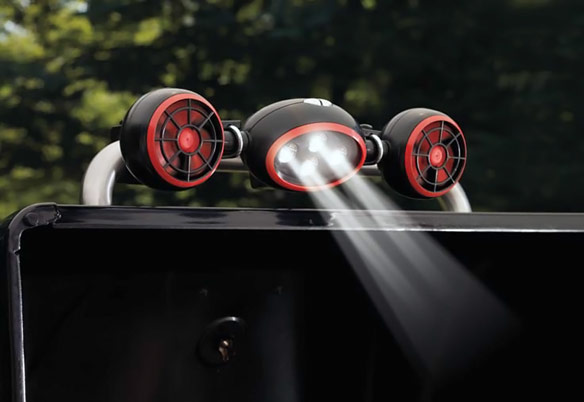 The clamp-on light and fan system uses 4 ultra-bright LED lights to illuminate your grill surface, and it rotates up to 300 degrees, making it handy for prep work, too. The dual fans do double the work by keeping you cool while pulling smoke away from your work area. Want to use the fan but already have plenty of light? No problem because the fans and light have separate switches, letting you control each separately.

This awesome Portable BBQ Grill Briefcase has enough room to cook for two and it is in an ultra portable form factor. It has an ash-catcher for easy mess disposal and it closes and locks securely for transport. Now you can grill anywhere and look […]

A NASCAR-themed BBQ grill – finally you can spice up your garden with a cooking equipment that looks alright next to your F1 Lawn Mover. A full size stainless steel Cal Flame 4 burner propane BBQ grill with lights! Slide out storage compartment for coolers, […]

The weather is warming up so it’s time to Barbecue once again. Clean up your grill and get set up. Don’t forget your Backyard BBQ Hamburger and Hot Dog on the Grill Salt and Pepper Shaker Set. It’s the perfect way to season your barbecued […]