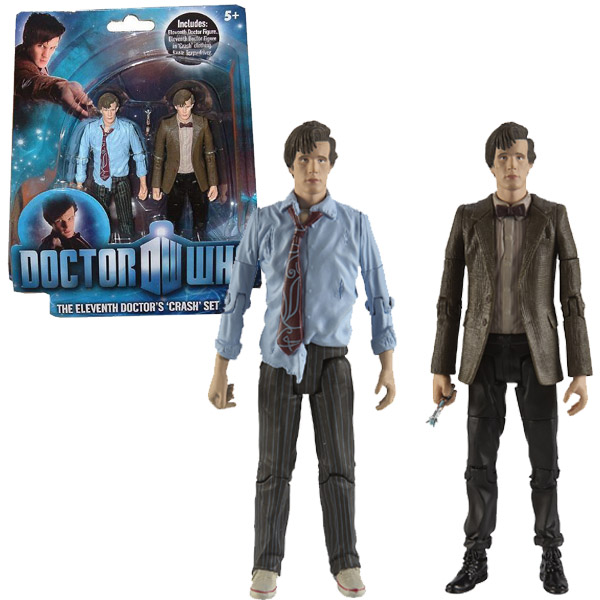 When Matt Smith’s Doctor arrived on the scene, he really did live up to the name of the Raggedy Man, and the Doctor Who Eleventh Doctor Crash Set Action Figures captures the bow-tie wearing Time Lord with two distinctly different looks.

The Eleventh Doctor came into existence just as the TARDIS was plummeting to Earth, which probably isn’t the best way to start one’s day. The poor guy was still wearing the tattered remains of the Tenth Doctor’s suit when he met his future Companion, Amy Pond, who promptly labeled him the Raggedy Man AKA Raggedy Doctor.

Of course, the Doctor has always been known to be fashionable when it comes to his appearance so he was soon wearing the tweed jacket and bow tie we all came to know and love.

The two-figure set includes two 5-inch-tall action figures with a likeness of Matt Smith wearing both his familiar wardrobe and the raggedy remains of Ten’s suit that he was wearing when he first encountered Amelia Pond, and of course he has his trusty sonic screwdriver with him.

This is a hard-to-find limited edition product that’s listed as sold out on most sites but there are nine to choose from on Amazon.com right now. Grab the Doctor Who Eleventh Doctor Crash Set Action Figures for $73 while they’re still around.

Before Amy Pond traveled through time and space, she was a little girl with an imaginary friend known as the Raggedy Doctor. The Doctor Who 11th Doctor Collectible Doll is a great idea that’s meant to give little Amelia Pond’s make-believe character a physical form. […]

The clock has struck Twelve but many still look back at Eleven, and the Doctor Who Goodbye Raggedy Man Tank Top is for those Whovians that will always have a special place in their hearts for Matt Smith’s Doctor. This white tank top features an […]

It’s the collision of the call boxes on the Time Crash T-Shirt, with the Doctor discovering that Bill and Ted aren’t great at navigating time and space. Travelling through time should be left to professional Time Lords. At least that’s probably what’s going through the […]

Doctor Who The Eleventh Doctor Mug

Who is your favorite Doctor? Matt Smith? If you can’t get enough of Matt Smith, check out this neat Doctor Who The Eleventh Doctor Mug. This mug looks just like the eleventh doctor. Well, except for the hole in the head. But otherwise the likeness […]

Doctor Who Tales of Trenzalore The Eleventh Doctor’s Last Stand

Discover some of the Doctor’s many untelevised adventures with Doctor Who Tales of Trenzalore The Eleventh Doctor’s Last Stand. In the Doctor Who episode, The Name of the Doctor, we saw how things ended with Eleven regenerating into Twelve after one last great battle to […]