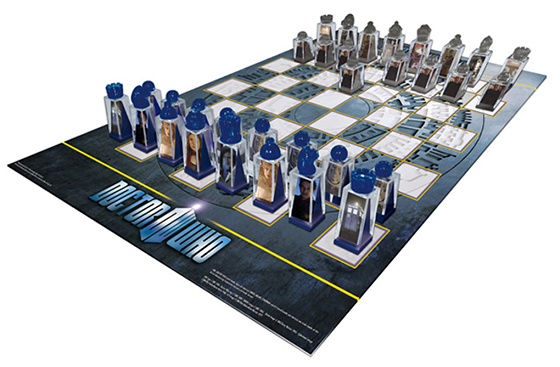 Play good guys against bad guys in this Doctor Who Chess Set featuring characters from Dr. Who Series 5. Imagine playing a game of chess with this set, using a Doctor Who Dalek Clock to time it, while wearing one of these Costume T-Shirts. In any case, if you think bow ties are cool, chances are you will like this chess set too.

There’s not a ton of information available about this Dr Who chess set at this time, as it hasn’t been released yet, but you can probably figure out if you want it or not just from the picture.

Chess can be a baffling game. You spend most of it trying to figure out what’s going on, while taking fire from your enemy. And even when it looks like all hope is lost, you just can’t help sticking around to see how it ends – just like an episode of Doctor Who.

Well, you can imagine our giddy squeals when we discovered that the two have been combined to create this Dr Who Chess Set. Taking everybody’s favorite characters from the 5th series – including the bow-tie-wearing Doctor himself – this compelling collection pitches goodies versus baddies. Ever thought chess was a dull game? Try going up against a Cyberman. Come along, Pond!