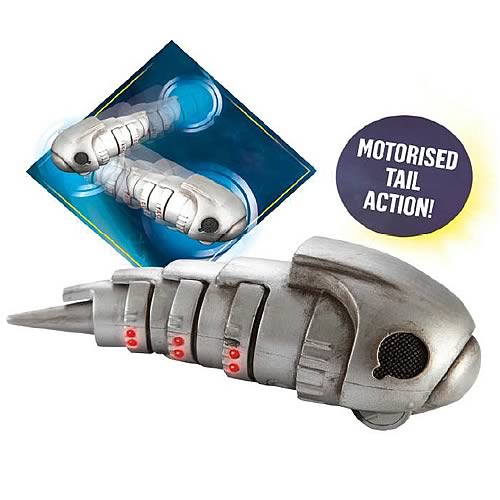 The newest toy for Doctor Who fans this Christmas is the Doctor Who Bump and Go Cybermat. The Cybermen used to be easy to defeat. All it took was gold since they were allergic to it. These days however, the current versions are much tougher to fight.

Especially when they create their own little cyber-bugs known as Cybermats. It spies on and hunts its prey down. Hopefully this toy is a bit less sinister. One cool feature is the motorized tail.

Just like the on screen version, this guy will hunt, patrol and change direction when it bumps into an object. Only $36.99 from Entertainment Earth. You can order it now and it ships in December.

I think we all hate waking up in the morning. Sometimes you just want to throw your alarm clock against the wall. That’s perfectly okay with the Mr Bump Off The Wall Alarm Clock. You are supposed to throw him at the wall every morning.

Are you a thrill seeker looking for something different? This Motorized Gyro Cycle should do the trick. Powered by a 2,000-watt electric motor, this one-wheeled self-balancing scooter can reach a max speed of 10 mph and provide hours of fun. The switchable riding modes allow […]