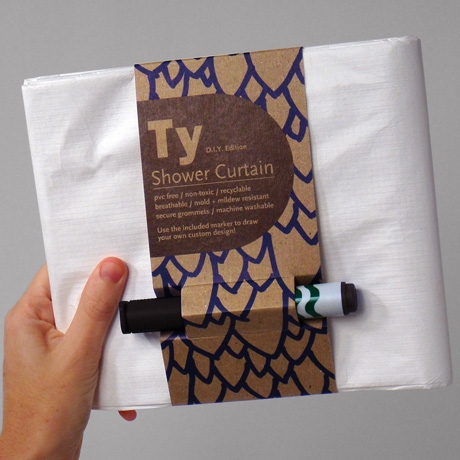 Go ahead and draw, doodle, and personalize your shower curtain however you want to. Want a checkerboard curtain? Or one that’s filled with swirls and circles? How about one that has your name on it or bears a warning to peeping toms to keep away? All of these are possible designs because with this curtain, you’re the one who’s in charge.

Have you had trouble finding the shower curtain that you like? Now there is a perfect solution to that problem. This shower curtain comes complete with permanent black marker to Draw-It-Yourself. Unlike other shower curtains made of vinyl, DIY Shower Curtain will not off-gas in your home. Also unlike vinyl, it breathes – making it less likely to grow gross mold and mildew. It’s stronger than vinyl and it can be recycled. For best results, draw on the shiny side. Let it dry completely before using.

Unleash your creativity to the world, one bathroom at a time. You can get the DIY Shower Curtain for $33 from Poketo.

This Retro Gaming Shower Curtain makes your shower into a fun old school game of cleanliness and hygiene. It’s Super Shower Time! It comes with 12 plastic shower curtain rings. This is just what every gamer needs to decorate their bathroom with. Retro Gaming Shower […]