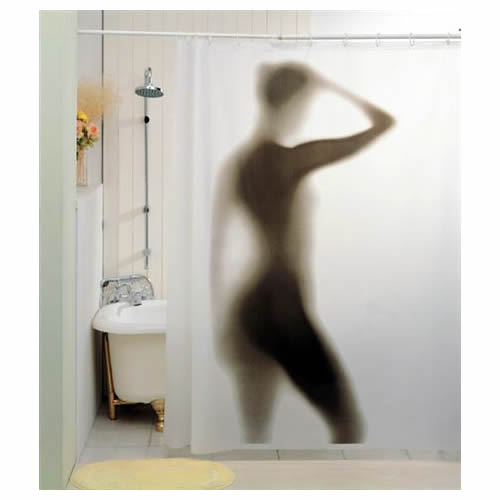 Of course, this probably only applies to humans of the female gender. If you’re up for playing a joke on your male roommates, then simply hang this curtain up and leave the bathroom door wide open and turn the shower on full blast. Then just hide inside the curtain and wait for the first person who’ll come and take the bait..

If you want to give anyone who enters your bathroom a good shock, this is the best way to do it. This Sexy Shower Curtain will leave them speechless!
The shower curtain features a silhouette of a woman striking a very sensual pose, which is a great way to arouse your friends’ envy.
Don’t ever tell them it was just a curtain, or you’ll ruin your reputation and will never again be your friends’ idol.

The Sexy Shower Curtain is available from Curiosite for $18.63.

Your bathroom will get a cool geek makeover when you hang this Star Trek: TNG Enterprise Blueprint Shower Curtain. It features a schematic diagram of the Enterprise D. You can study everything from the impulse engines, the dorsal phaser array, to the deflectors while you […]