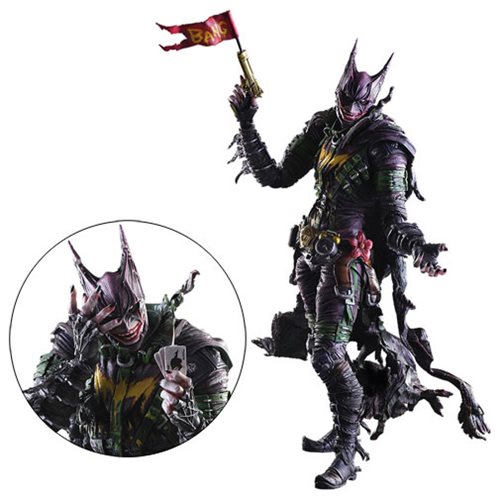 The Clown Prince of Crime and the Dark Knight have always been linked together but Square Enix takes that to a new level with the DC Comics Batman Joker Rogues Gallery Play Arts Kai Variant Action Figure.

The Joker has the last laugh as he slips into a makeshift Batman costume that consists of a tattered straitjacket with a rough Bat logo painted on it and a utility belt with items that include dynamite, a flower, cans of pepper spray, and an alarm clock.

The DC Comics Batman Joker Rogues Gallery Play Arts Kai Variant Action Figure will be available February 2017 but it can be pre-ordered now for $199.99 at Entertainment Earth.

The DC Comics Joker Variant Play Arts Kai Action Figure depicts Batman’s arch nemesis in a new way. This Joker is basically a phantom, able to transform at will, thanks to all of the accessories. This figure includes 7x interchangeable faces, giving you a variety […]