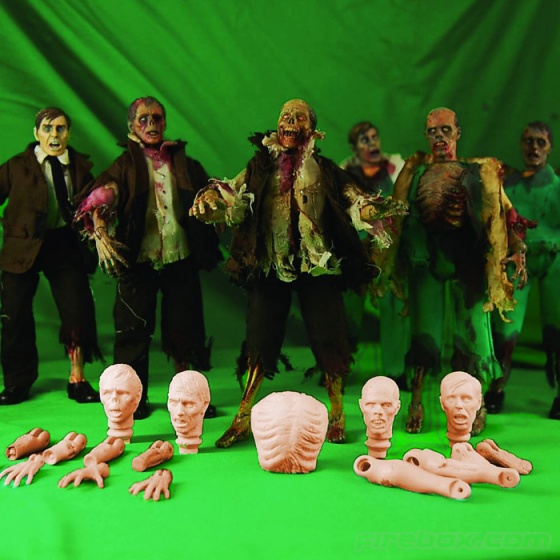 Ever since Plants versus Zombies made its debut, I’ve been seeing a whole lot of zombies in the media lately. Even before that, though, zombies have already been quite popular with writers and movie makers and graphic artists. Take the Walking Dead series of graphic novels, for example. With the Create Your Own Zombie Kit, you can assemble your own undead character, make their faces up, and make them dress the part to boot.

I saw several episodes of the Walking Dead television series lately and I felt inspired to do something like–you guessed it–put together my own zombie. This kit makes it easy for you to do so, as it comes complete with several heads, torsos, limbs, and clothes that you can tear up later on to give it a more authentic look. 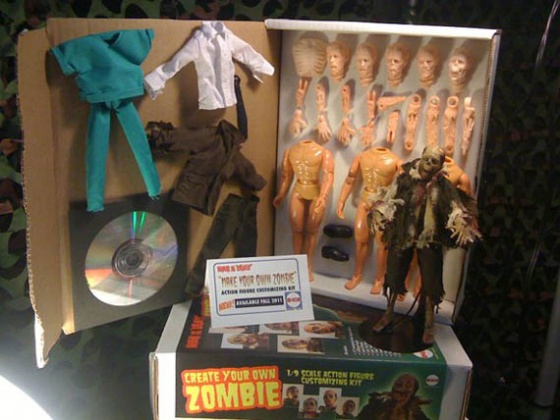 Perfect for horror freaks and action figure fans bored of sawing up Action Men and covering ‘em in yesterday’s spag bol (don’t pretend you haven’t), this fantastic kit lets you create and paint your very own zombies.
Each kit contains 3 bodies, 2 suitably creepy costumes, 5 heads and various interchangeable arms, hands, legs and feet in various states of decay with torn flesh, exposed bone and withered skin. Barbie and Ken this ain’t!
As well as all the zombie bits and bobs you also get a DVD crammed with step-by-step painting and assembly tips to help make your zombie(s) as repulsively realistic as possible.

The Create Your Own Zombie Kit is available for pre-order from Firebox for $64. Here are some other cool Zombie things: Zombie Plush, Garden Zombie Statue and Zombie Cookie Jar.

If you ever wanted to create your own zombie, but didn’t want to unleash a horrible virus, this Create Your Own Zombie Action Figure Kit is the way to go. You may not be aware of this, but researchers at the “Zombie Emergency Response Operations” […]