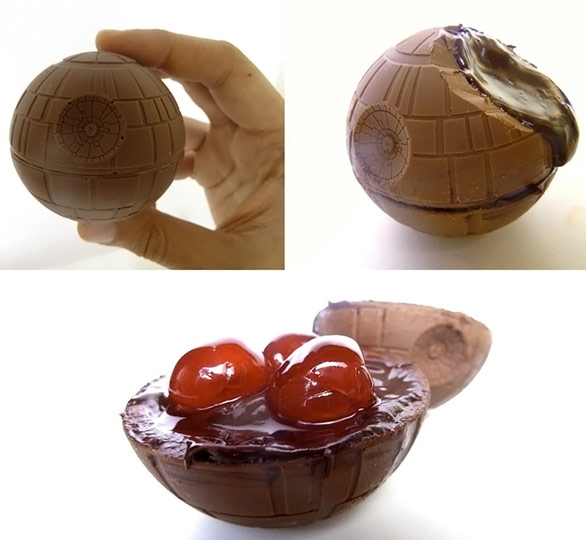 Although the Death Star had the power to destroy an entire planet in one shot, you could destroy a Chocolate Death Star in just a few bites. The easiest way to reach the cherries inside is to start along the trench, then target the small thermal exhaust port. Much tastier than a womp rat, that’s for sure.

Look at him. He’s grabbing that small moon.

That’s no moon! It’s a CHOCOLATE!

It’s too big to be a chocolate.

Death Star Chocolates are a creation of ZeeK Confeitaria. Unfortunately, you can only order them in Brazil, as they do not ship internationally.

However, you can pick up the Death Star (probably the same mold ZeeK Confeitaria used to make the chocolates pictured above), Han Solo in Carbonite, Millennium Falcon, X-Wing, Darth Vader, Stormtrooper, or R2-D2 silicone molds and make some Star Wars themed chocolates of your own.

(Via Geeks are Sexy)

When it comes to Star Wars molds, bigger is always better. These Star Wars Deluxe Silicone Molds are perfect for making large treats. Are you hungry for Han Solo in Carbonite brownies? A chocolate R2-D2? Maybe a Jello Millennium Falcon? These deluxe ice trays come […]