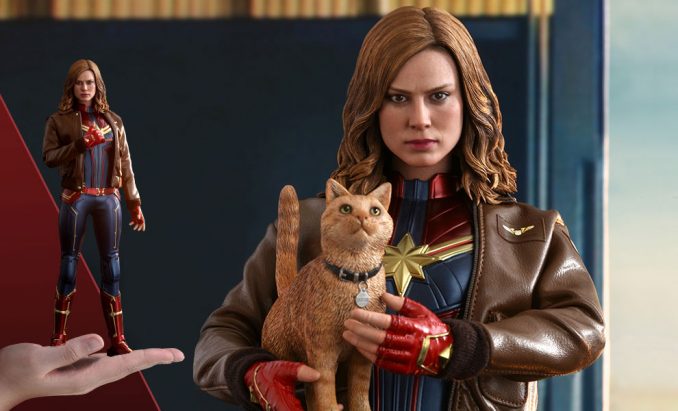 Part of the Movie Masterpiece Series, this Captain Marvel Deluxe Sixth Scale Figure from Hot Toys is an incredibly accurate depiction of Carol Danvers/Captain Marvel as portrayed by Brie Larson in the movie. What makes this collectible figure so special are all the interchangeable features and accessories so you can recreate the look for almost any scene.

The action figure itself features 28 points of articulation and has an LED light up function for the forearms. There’s the regular head that looks like Brie Larson as well as a light up helmeted head that can be complete with a blond hair mohawk or a translucent yellow mohawk. There are seven gloved hands to allow the figure to be relaxed, in fists, or showing various gestures. Then there are various accessories to fit on the hands for different energy-blasting effects.

Some of the coolest accessories only come with this deluxe edition. There is Goose the Cat, a brown leather-like jacket, and a pair of gradient yellow and blue fire effect accessories.

Today, Hot Toys is expanding Movie Masterpiece Series with the cosmic-powered hero Captain Marvel in 1/6th scale collectible figure which is eagerly awaited by millions of fans! Go on an epic adventure with Carol Danvers – better known as Captain Marvel – a former U.S. Air Force fighter pilot with power to change the world.

Expertly crafted based on the appearance of Brie Larson as Carol Danvers/Captain Marvel in the movie, the highly-detailed collectible figure features two interchangeable head sculpts including a newly develop unmasked head sculpt with amazing likeness and a newly developed helmeted head sculpt with LED light-up function that accentuates Captain Marvel’s superpower, two pieces of classic Mohawk hair sculptures, a newly developed body equipped with LED light-up function on both sides of the forearms, a skillfully tailored costume in metallic red and blue with a gold star emblem on chest, multiple energy-blasting effect accessories that are wearable on arms, and a movie-themed dynamic figure stand for aerial poses!

The Deluxe Version will exclusively include Goose the Cat, a delicate Flight Bomber jacket and an extra pair of firing effect accessories to complete the style.

This Captain Marvel Deluxe Sixth Scale Figure is available to pre-order at Sideshow, where it is priced at $266. The estimated arrival is between October and December 2019.

Bruce Wayne and his alter ego Batman, may not wear a Mohawk, but that doesn’t mean you can’t. The Batman Mohawk Peruvian Hat is a stylish way to keep warm when you hit the slopes this winter or slip it on when the sun heads […]