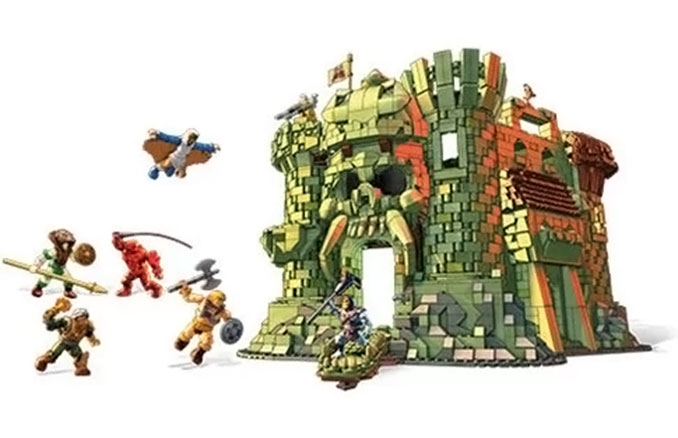 This massive new Mega Construx Probuilder Masters of the Universe Castle Grayskull Playset shows that Mega Construx is ready to go head to head with LEGO. It contains over 3,500 pieces that allow you to build a detailed Castle Grayskull complete with a drawbridge that opens and closes, a working elevator, and a throne room with surprises.

You’ll have the power with this faithfully recreated Masters of the Universe Castle Grayskull Playset from Mega Construx! Castle Grayskull was built to protect an unknown source of power, and now you can build it in your own home with this 3,508-piece playset. The castle opens wide to reveal working weapons and launchers, a throne room with surprises, a working elevator, and a drawbridge that opens and closes. This sensational collector’s set also includes 6 micro action figures: He-Man, Skeletor, Man-at-Arms, Teela, Beast Man, and the exclusive Sorceress!

This Mega Construx Probuilder Castle Grayskull Playset is available to pre-order from Entertainment Earth for $249.99.

If you love building sets and love Halo, you’ll want this massive Mega Construx Halo UNSC Infinity. Clocking in with a whopping 2,456 pieces, once constructed the Halo UNSC Infinity measures over 31″ long. Although huge LEGO sets often come with numerous minifigures these days, […]

Take a trip back into the 80s with the Masters of the Universe Teela PCS Exclusive Edition Statue, because the captain of the Royal Guard really has nothing better to do than hang around your house all day. And why doesn’t Teela have anything better […]

He-Man fans can display their business cards in style with this He-Man MOTU Castle Grayskull Business Card Holder. How awesome is that? You will make quite an impression on anyone who takes your business card. Display it on your desk. All you have to do […]

You can wield that power any time with this cool Castle Grayskull Keychain. This powerful key holder is officially-licensed He-Man merchandise, so you know that the power is here. You’ll never lose your keysagain, because you love your keychain so much and would never want […]

This Star Trek: The Original Series Mega Bloks Transporter Room Playset is based on the Mirror, Mirror episode when a doorway to a parallel universe opens in the U.S.S. Enterprise Transporter Room. This Transporter Room features six platforms, a computer console, interchangeable glow-in-the-dark wall panels, […]