With the latest installment of the Bond franchise, Skyfall, doing so well in theaters, it’s no surprise that James Bond has been around for 50 years. The Bond 50 – A 22 Film Blu-ray Collection is a collection of 22 films from the days of Sean Connery to the current Bond, Daniel Craig. Nine of the included films are on Blu-ray for the first time, giving fans a chance to see all that classic action in high definition.

The world of Bond has taken many generations by storm and we all have our personal favorite, it’s Sean Connery for me. While I appreciate the toughness Daniel Craig and the latest Bond films have brought to the franchise, I do miss those classic Bond girl names, Pussy Galore, Xenia Onatopp and Dr. Holly Goodhead. 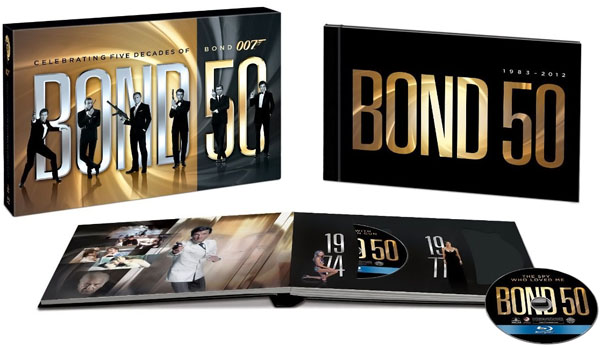 The World of Bond – the 007 films have a look, style and attitude that is signature Bond. From the cars, to the women, to the villains and even the music, Bond films stand apart. The World of Bond takes the viewer through the best of five decades worth of classic James Bond in one thrilling montage. The World of Bond showcases the fascinating and entertaining interplay among unforgettable moments of danger, seduction, adventure and a dash of that distinguished humor that fans have cherished from the beginning up until now. To add to the experience, The World of Bond featurette will also offer a Pop-Up Trivia option to challenge even the sharpest of fans with little known facts and interesting trivia from the Bond Universe.

Being Bond – there’s only one James Bond – but he’s proven too much for only one actor to play the role. In the franchise’s 50-year run, six distinguished actors have taken on the part and secured a spot in cinematic history. Sean Connery, George Lazenby, Roger Moore, Timothy Dalton, Pierce Brosnan, and Daniel Craig each reflect on the impact and importance of taking on such a famous role. With this piece, gain insight into what each actor brought to the character and discover how they shaped the world’s most timeless secret agent.

Can you handle this much awesomeness? The James Bond Goldfinger Collection Sixth-Scale Figures practically give you a license to kill. If you like your martini shaken and not stirred, these three figures are the ones you’ve been waiting for. Based on the 1964 film, Goldfinger, […]