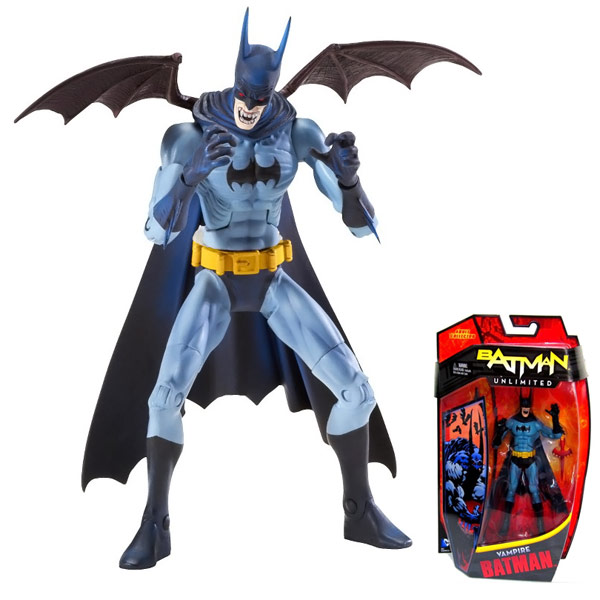 No, this isn’t a special Halloween version of the Dark Knight; it’s the Batman Unlimited Vampire Batman Action Figure, providing a glimpse of what Bruce Wayne’s alter-ego would look like if he went up against a vampire… and lost.

While I’m not a huge fan of the wings sticking out from Batman’s shoulders, you have to admit an immortal vigilante with a thirst for a blood would definitely keep Gotham City’s criminal element on their toes. The twisted adventures of this Batman take place in the Elseworlds stories Batman & Dracula: Red Rain, Batman: Bloodstorm and Batman: Crimson Mist.

The Batman Unlimited Vampire Batman Action Figure is available for $17.99 at Entertainment Earth. Also at Amazon.com for about $23.

I hate it when the Caped Crusader looks all slim and trim but that’s not a problem for the masked man captured in the Batman Unlimited Dark Knight Returns Action Figure. Frank Miller introduced us to a brand-new Batman with a completely new look in […]

These Star Wars Mist Machines are perfect for creating fog and setting a creepy mood. You can choose from Darth vader or a Stormtrooper. Perfect for Halloween or anytime you want to create some mist and make things creepy. Product Specifications Star Wars Misters Officially-licensed […]