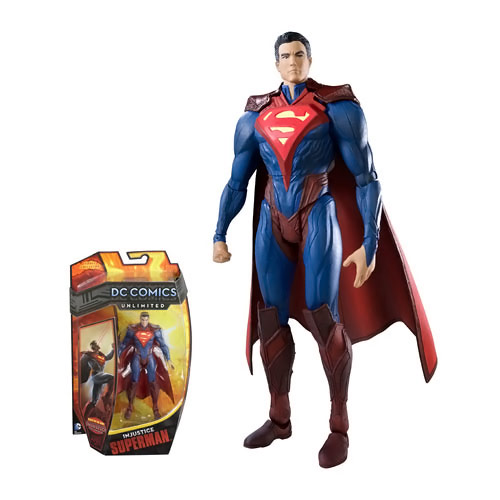 Superman might be tough enough to be called the Man of Steel but there are times when even he has to step his game up a notch or two, and the DC Unlimited Injustice Superman Action Figure shows off Kal-El’s new look during one of those moments.

The Injustice: Gods Among Us video game launched a comic book of the same name that showed us an alternate universe where Superman loses his ever-loving mind. Of course, a tyrannical, power-mad Kryptonian can’t simply wear the same old duds when he’s operating under a new set of rules so an upgrade on the familiar blue-and-red ensemble was needed.

The DC Unlimited Injustice Superman Action Figure is available for about $18 at Entertainment Earth and Amazon.com.

Superman is looking good in this Injustice Gods Among Us Superman SH Figuarts Action Figure. The dynamic SH Figuarts Injustice line-up would not be complete without the Man of Steel himself and here he is. This statue is sculpted in meticulous detail and features a […]

Batman Injustice 2: The Versus Collection Batman and Brainiac Statue Set

The Batman Injustice 2: The Versus Collection Batman and Brainiac Statue Set looks amazing with there is some really great detail on these characters. They are based on the sequel to the hit game Injustice: Gods Among Us and they do the game proud. The […]

The Injustice Big Group T-Shirt assembles the characters of the Injustice: Gods Among Us video game and comic books, letting you wear the heroes who go hardcore when it comes to taking down evil. The 100% cotton tee features a roster of popular comic book […]

No, this isn’t a special Halloween version of the Dark Knight; it’s the Batman Unlimited Vampire Batman Action Figure, providing a glimpse of what Bruce Wayne’s alter-ego would look like if he went up against a vampire… and lost. While I’m not a huge fan […]

I hate it when the Caped Crusader looks all slim and trim but that’s not a problem for the masked man captured in the Batman Unlimited Dark Knight Returns Action Figure. Frank Miller introduced us to a brand-new Batman with a completely new look in […]