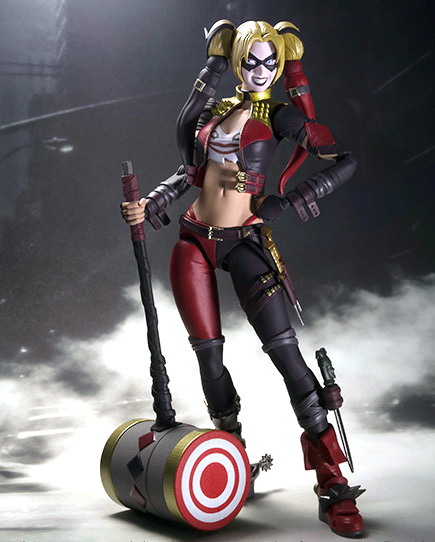 It’s time to throw justice out the window with the Injustice Gods Among Us Harley Quinn SH Figuarts Action Figure.

If you haven’t read the Injustice: Gods Among Us comic storyline, I won’t ruin it for you. Let’s just say Superman flips his lid and does something bad to the Joker… which doesn’t do wonders for Harley’s sanity… which is scary because she wasn’t very sane before.

Wearing an altered version of her original harlequin outfit, Harley comes with all the accessories needed to wreak a little mayhem in the name of justice:

The Injustice Gods Among Us Harley Quinn SH Figuarts Action Figure will be available August 2015 but it can be pre-ordered now for $55.99 at Entertainment Earth. Also at Amazon.com.

Superman is looking good in this Injustice Gods Among Us Superman SH Figuarts Action Figure. The dynamic SH Figuarts Injustice line-up would not be complete without the Man of Steel himself and here he is. This statue is sculpted in meticulous detail and features a […]

Batman Injustice 2: The Versus Collection Batman and Brainiac Statue Set

The Batman Injustice 2: The Versus Collection Batman and Brainiac Statue Set looks amazing with there is some really great detail on these characters. They are based on the sequel to the hit game Injustice: Gods Among Us and they do the game proud. The […]

The Injustice Big Group T-Shirt assembles the characters of the Injustice: Gods Among Us video game and comic books, letting you wear the heroes who go hardcore when it comes to taking down evil. The 100% cotton tee features a roster of popular comic book […]