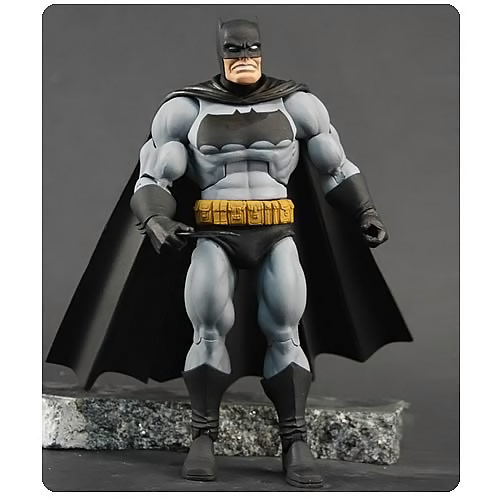 I hate it when the Caped Crusader looks all slim and trim but that’s not a problem for the masked man captured in the Batman Unlimited Dark Knight Returns Action Figure.

Frank Miller introduced us to a brand-new Batman with a completely new look in “The Dark Knight Returns.” He doesn’t look like a toned acrobat. He looks like a tank with clothes on, and that’s the way it should be. Batman is the regular guy that can go toe-to-toe with Superman and still have a shot at winning so he should look like a brawler.

The look is captured well in this remarkably detailed action figure, which stands about 7-inches tall with a tough expression on his face. This guy’s not happy, and he has the muscle to make the bad guys just as unhappy as he is.

The Batman Unlimited Batman Dark Knight Returns Action Figure will be available August 2013 but it can be pre-ordered now for $17.99 at Entertainment Earth. You can pick it up now at Amazon.com for just under $25.

No, this isn’t a special Halloween version of the Dark Knight; it’s the Batman Unlimited Vampire Batman Action Figure, providing a glimpse of what Bruce Wayne’s alter-ego would look like if he went up against a vampire… and lost. While I’m not a huge fan […]

An old but still tough Batman comes out of retirement to punch a bad guy in The Dark Knight Returns Deluxe Boxed Set. Based on Frank Miller’s classic tale of Batman once again putting on the cape and cowl, this limited-edition piece includes Batman and […]