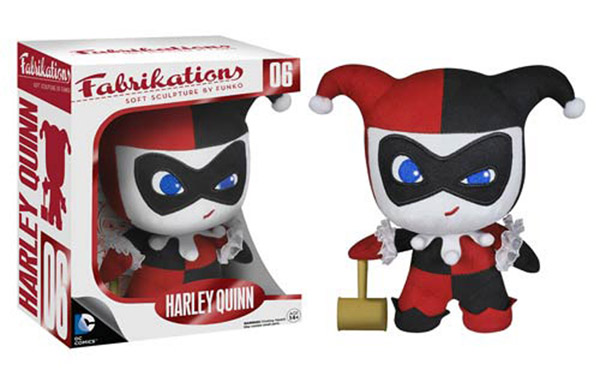 The expression on the face of the Batman Harley Quinn Fabrikations Plush Figure lets you know beyond a shadow of a doubt that naughty thoughts are being had… and naughty usually means bloody in the messed-up mind of the sometimes gal-pal of the Joker.

Fabrikations might be a name you’re unfamiliar with but fans of geeky collectibles will be thrilled to know that the company behind the name has been around for a long time. Funko, the same folks behind the Pop Vinyl toys, have branched out into plush figures, although a quick glance at Ms. Quinn shows the company isn’t trying to fix what ain’t broke because the plush figures share the same physical characteristics of the Pop Vinyl figures.

Standing over 6 inches tall, Harley Quinn is able to stand on her own, has a rotating head, and something referred to as a “character-specific accessory,” which I’m assuming is the hammer since the girl really loves her hammer.

The Batman Harley Quinn Fabrikations Plush Figure will be available June 2014 but it can be pre-ordered now for $19.99 at Entertainment Earth.

Experience the softer side of Deadpool with this awesome Deadpool Fabrikations Plush. This soft figure is flat-bottomed with weighted feet for easy display. It also has embroidered details and vinyl accessories. This is a must for Marvel fans. It is so soft you will want […]

He’s cute, furry, short-tempered, and foul-mouthed. Fortunately, you don’t have to worry about those last two with the Guardians of the Galaxy Rocket Raccoon Fabrikations Plush Figure. Raccoons, even ones as feisty as Rocket, are supposed to be furry, which makes this wild member of […]

Look at how adorable this Batman Fabrikations Plush Figure is. He will be the cutest Caped Crusader in your collection. Maybe the softest too. This version of Batman is a figural plush that can stand up and he stands 6 inches tall. Ready for action […]

You usually want to let the Wookie win because an angry Wookie can pull your arms out of their sockets, but the Star Wars Chewbacca Fabrikations Plush Figure will have you letting the furry guy win because he’s just so darn cute. Standing a little […]

Going somewhere Solo? You know him. You love him. It’s Greedo! Han shot first! This Star Wars Greedo Fabrikations Plush Figure recreates the green skinned bounty hunter in a smaller and much cuter scale. This figural plush can stand up and not just to Han […]