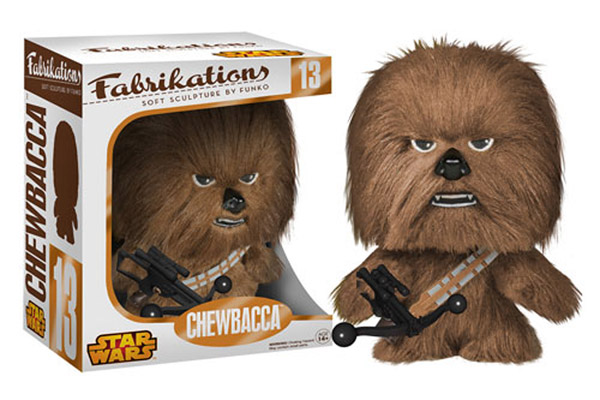 You usually want to let the Wookie win because an angry Wookie can pull your arms out of their sockets, but the Star Wars Chewbacca Fabrikations Plush Figure will have you letting the furry guy win because he’s just so darn cute.

Standing a little over 6-inches tall, this furry Funko version of Han Solo’s best friend and co-pilot is a long way from being life-sized, but mini-Chewie does come with his iconic bandolier and bowcaster. He’s also able to stand and turn his head. However, I doubt he’d be able to help fly the Millennium Falcon.

The Star Wars Chewbacca Fabrikations Plush Figure will be available November 2014 but it can be pre-ordered now for $19.99 at Entertainment Earth.

He’s cute, furry, short-tempered, and foul-mouthed. Fortunately, you don’t have to worry about those last two with the Guardians of the Galaxy Rocket Raccoon Fabrikations Plush Figure. Raccoons, even ones as feisty as Rocket, are supposed to be furry, which makes this wild member of […]

Experience the softer side of Deadpool with this awesome Deadpool Fabrikations Plush. This soft figure is flat-bottomed with weighted feet for easy display. It also has embroidered details and vinyl accessories. This is a must for Marvel fans. It is so soft you will want […]

The expression on the face of the Batman Harley Quinn Fabrikations Plush Figure lets you know beyond a shadow of a doubt that naughty thoughts are being had… and naughty usually means bloody in the messed-up mind of the sometimes gal-pal of the Joker. Fabrikations […]

Be like Han Solo and get your hands on the Star Wars: The Force Awakens Chewbacca’s Bowcaster. Solo and Chewie have been friends for years but The Force Awakens was apparently the first time Han had tried his furry friend’s laser crossbow, known to most […]

Look at how adorable this Batman Fabrikations Plush Figure is. He will be the cutest Caped Crusader in your collection. Maybe the softest too. This version of Batman is a figural plush that can stand up and he stands 6 inches tall. Ready for action […]