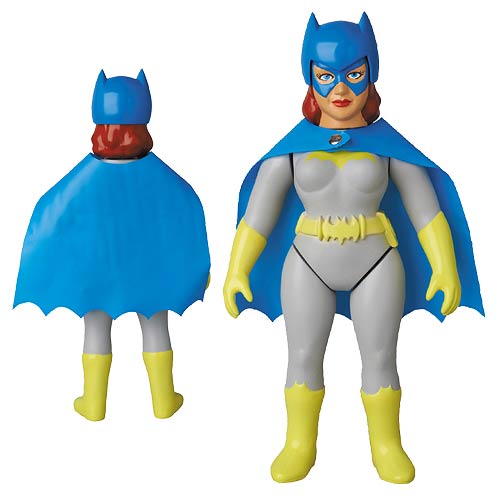 Barbara Gordon is ready to clean up the streets of Gotham City with the Batman DC Hero Batgirl Sofubi Vinyl Figure, offering a unique take on Commissioner Gordon’s daughter.

Standing a whopping 10-inches tall, this figure is made of soft vinyl and features a removable cape. Unlike the Batman DC Hero Sofubi Soft Vinyl Action Figure, her mask doesn’t come off but you can still get a little joy out of the fact that she stands taller than the 9 3/4-inch-tall Batman figure. Wouldn’t it be great if Batgirl were actually taller in the comic books? Just imagine all the short jokes that could be worked in.

The Batman DC Hero Batgirl Sofubi Vinyl Figure will be available January 2015 but it can be pre-ordered now for $79.99 at Entertainment Earth.

The Batman Harley Quinn Sofubi Action Figure looks pretty cute but don’t let your guard down because you know this girl has a few bats in the belfry. Sofubi is a Japanese style of making toys and sculptures using soft vinyl and you might already […]

Take a tall, soft vinyl figure and give it a mission to fight crime because you killed its parents, and you get the Batman DC Hero Sofubi Soft Vinyl Action Figure, the hero that your Batman collections wants… and needs. This 9 3/4-inch-tall, soft Japanese […]

A lot of women say they’re not into looks or appearances. I think it’s not that they’re lying or anything; I think most women try to look past appearances and look at character of the person instead. But set that woman up on a blind […]

The Guardians of the Galaxy Rocket Raccoon Marvel Hero Sofubi Vinyl Figure depicts the smart-mouthed Rocket Raccoon! He is hand-painted and designed to replicate the look of the classic Japanese sofubi vinyl toys of days past. This figure is a Previews Exclusive. Rocket measures about […]

Check out this Star Wars Wampa Grey Skull Premium Hikari Sofubi Vinyl Figure. It is the fearsome Wampa from the planet Hoth as a Hikari Sofubi vinyl figure! This figure is limited to only 250 pieces worldwide. The snow beast from the epic sci-fi movie […]