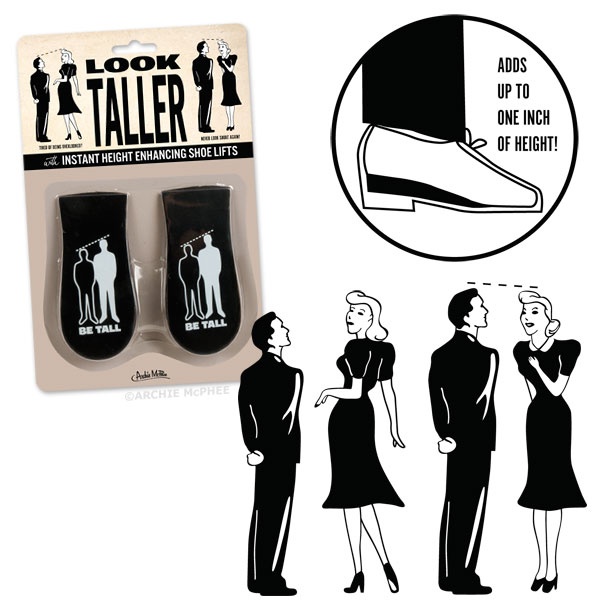 A lot of women say they’re not into looks or appearances. I think it’s not that they’re lying or anything; I think most women try to look past appearances and look at character of the person instead. But set that woman up on a blind date with a man who’s an inch or two shorter than her and she’ll usually find that hard to swallow. So men, here’s a tip: buff up, puff your chest out, and look a full inch taller by slipping the Look Taller Shoe Lifts into the soles of your shoes.

The Look Taller Shoe Lifts look old-fashioned, and that’s because they’re modeled after a similar but retro product that used to be advertised in the back of men’s magazines. 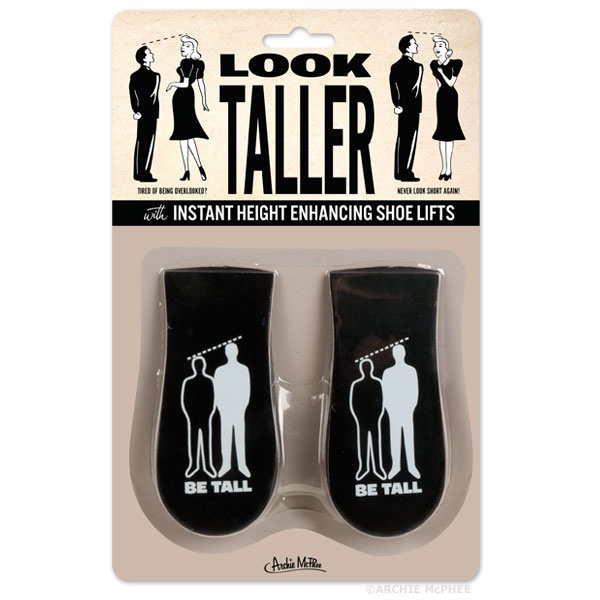 This is a re-creation of a retro product that used to be sold in the back of men’s magazines. The vintage imagery and text communicate hilariously outdated ideas about the importance of height in business and matters of love. Surely, we’re all beyond that now, but just in case we aren’t, these foam shoe inserts will add an inch to your height.

The Look Taller Shoe Lifts are available from McPhee for $4.51.

When something wet is left to dry in a small or enclosed area, it’s going to smell. And if that something happens to be your gym trainers or shoes for work, then you can be sure that it’s going to be stinkier than ever. Prevent […]

GeekAlerts has shown Chuck Taylor Converse fans some pretty cool kicks with the Dr. Suess Edition and Green Eggs and Ham Edition Converse shoes, but not all cool Converse items are made for your feet. Sure the Converse Shoe Pencil Case looks just like the […]

This Foam Cosplay 31″ Battle Axe is made of foam, so it i perfect for cosplay. The foam is durable, but no so hard it will sever limbs. It withstands up to 80 lbs. of pressure and looks authentic. This is a fine weapon for […]

Stinky feet will always stink, but stinky shoes can escape doom and damnation with the ShUVee Shoe Deodorizer. When bad smelling funk builds up inside your shoes each time you wear them, it’s tough to get rid of the odor and kill the germs. We […]

Taking a hike at night can be tricky because you need to be able to see where you’re going but a flashlight leaves you one hand short. The Uncle Milton National Geographic Expedition Shoe Lights let your feet light the way while leaving both your […]

Some really spectacular lagers, a.k.a. Sapporo and Asahi, have come from the wondrous country of Japan. To hit international beer status, beer must meet all the proper criteria, including delivering just the right amount of foaminess. Japanese lagers produce truly glorious foam when poured from draft. What’s their secret? They could tell […]

These boots are made for shoes. No, that’s not a typo. The Wonder Woman Boots Bootlet Shoe Covers let you transform your regular shoes into Wonder Woman’s boots. Now, all you need is the costume and the lasso and you’ll be ready to help the […]

When you need to practice your martial arts or swordplay, do it safely with a Rigid Foam Sparring Sword. This sparring sword lets you practice full speed, full contact training. Save your real sword for the zombies. The Foam Sparring Sword is designed to last […]

This three-striped mini sports shoe USB drive looks like the type of footwear Adidas brings you. I doubt they have anything to do with the product though.