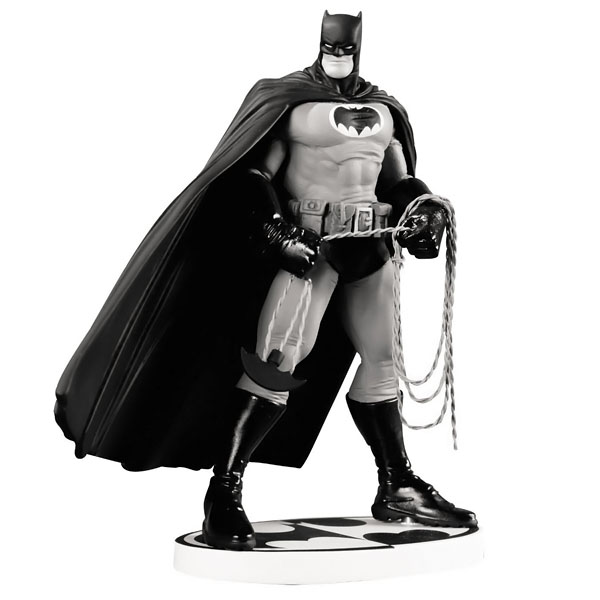 Even as an old fogey, Batman still kicks butt, and the Batman Black and White 2nd Edition Statue by Frank Miller lets you add the senior citizen vigilante to your Bat collection with monochromatic style.

I’ll be honest. The Bat lost his shine a long time ago, in my opinion. But then, Frank Miller turned the iconic comic book character on his head in The Dark Knight Returns. Batman was actually old. He had even retired. But of course, you can’t keep a good hero down so he took to the streets and started bashing heads again… and he had a lot of fun doing it.

In addition to introducing us to an old Batman, Frank Miller also captured our attention with some truly great artwork, and this statue captures his distinctive take on the caped crusader. Just look at that evil grin. This is a Batman that really enjoys cleaning up the streets of Gotham City, and he’s still stout enough to take care of business.

You can get the Batman Black and White by Frank Miller 2nd Edition Statue for $69.99 at Entertainment Earth and for $77.50 at Amazon.com.

The Dark Knight gets yet another new look with the Batman Black and White Statue by John Romita Jr. So you’ve gotten the black and white Batman statues by Frank Miller, Jonathan Matthews, Norm Breyfogle, and even the really weird one from Kim Jung Gi. […]

If Miller Lite is your beer of choice, make a party of it with these Miller Lite String Lights. This light set will let you decorate with miniature lit-up versions the Miller Light beer can so you can impress your friends. Hang these on your […]

Take a seat, Conan, because you look kinda lame next to the Frank Frazetta Death Dealer 1:4 Scale Statue. Fantasy artist Frank Frazetta created many eye-popping images filled with interesting characters and the mighty Death Dealer has to be one of the most popular. Based […]