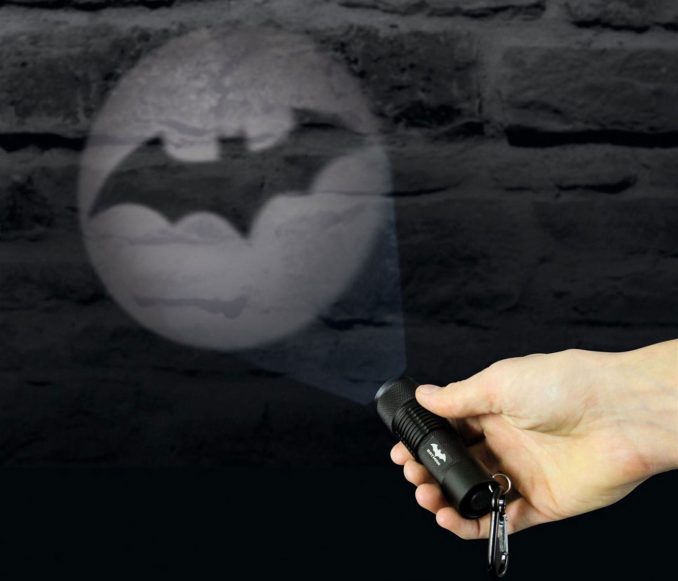 Be ready to activate the Bat Signal at a moment’s notice with this Batman Bat Signal Projection Flashlight. This compact flashlight, powered by a single AA battery, is officially licensed by DC Comics and shines the Bat Signal. The Batman logo has varied over the decades and different comics, television series, movies, and video games, but this one appears to look most like like the one from Gotham Knights comics or the Arkham Knight video games.

A portable handheld torch that projects the iconic Batman logo, the torch features aluminum casing with a matte black finish and is powered by 1 x AA battery (not included). The Batman Handheld Projection Torch also comes with a carabiner attachment, meaning it can be affixed to bags or keyrings so it’s always on hand when you need it most. Batman is an instantly recognizable brand and has transcended his comic book origins to become a cultural icon for over 70 years.

First appearing in Detective Comics in 1939, the crime-fighting anti-hero is the vigilante alter ego of billionaire playboy Bruce Wayne. Batman is a hero to both adults and children the world over, making this Batman Handheld Projection Torch the perfect gift for any comic book or superhero fan, as well as being a great piece of Batman memorabilia. The Batman Handheld Projection Torch is an officially licensed product.

Purchase this Batman Bat Signal Flashlight for $11.99 at SuperHeroStuff.com. It’s made by Paladone, a UK gift and gadget designer, and they call flashlights torches over there.

If you don’t have a good cell signal at your home or office, you need the SureCall EZ 4G Five-band Home Cellular Signal Booster. You can say goodbye to dropped calls and boost your 4G LTE data rate quickly and easily with this simple plug-and-play […]

When you want to call Batman you need a Bat signal. And who doesn’t want to call on the Dark Knight to clean up Gotham city? This Batman Signal Projection Alarm Clock lets you start your day like Commissioner Gordon. This clock projects the “Bat-signal” […]

Here’s a little something that’s good for providing a laugh and lighting your way. The next time somebody comes up with a cigarette and asks if you have a light, just whip out the Flip Torch Flashlight and watch their amazed reaction when they realize […]

The Batman Bat Signal Projector is a must have if you are Commissioner Gordon, or if you are just a fan of Batman. Either way, it gives you a way to call the Dark Knight whenever you or the city needs him. Now you can […]