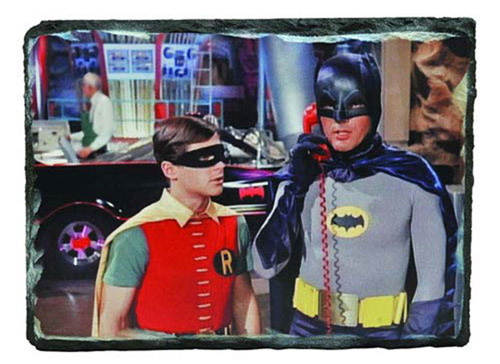 Others will know your devotion to the Caped Crusader is rock-solid when they see your Batman 1966 TV Series Batcave Granix Art Plaque, which features all the Bat goodness you could possibly want in one image.

Sure, it’s cool that a retro image from the popular 1966 Batman TV series is being displayed on a large chunk of slate but it’s the image itself that really makes this a win for fans. Just look at all the goodies that are included here:

Of course, you get Adam West and Burt Ward as Batman and Robin but you also get a peek at the classic Batcave, along with a decent look at the 1966 Batmobile, which is still one of the best vehicles Batman has ever driven, in my opinion. You can even see Alan Napier as Alfred, puttering around in the Batcave with his green apron as he dusts or brings sandwiches down for the Dynamic Duo… or whatever it was he did in the Batcave.

If you want to honor the world of Star Trek, especially the Enterprise, then find a space on your shelf and display this awesome Star Trek Enterprise Granix Art Plaque. It celebrates the Enterprise with an image of the ship on a stone plaque. Fans […]

Is this not the cutest apron ever to haunt the pages of GeekAlerts?! If you live in a house full of Super Mario fanatics or are one yourself, you couldn’t pick a more adorable apron than the Boo-Super Mario Apron. Though Boo is a ghost, he’s […]

Chances are you have a dad who is just as big a Star Wars fan as you are. Maybe your dad even took you to see a Star Wars film on the big screen for the first time. Since Father’s Day is coming up soon, give your old man something […]

The Batman 1966 TV Series Batcave Desktop Sculpture Statue has LED lights that bring it to life. It measures about 18-inches long and weighs in at 20 pounds. This statue features 16 different LED lights in a variety of hues. It even has period correct […]

Ever feel like enjoying a warm fire but not really into the rustic charm (or handling the required maintenance) of a fireplace? The Slate Tabletop Fireplace brings the fireplace into the 21st century, allowing you to enjoy the fire, the style, and the convenience of […]

How to Keep Your Husband Apron

You don’t have to say you’re the Dark Knight when subtle hints like the Batman ‘Welcome To The Batcave’ Door Mat will let everyone know you no longer care about having a secret identity. If you’re Tony Stark, you hold a press conference and announce […]

GeekAlerts has shown some pretty cool coasters in the past like: The Nightmare before Christmas Wooden Coaster Set, Stargate Coasters and Rubik’s Cube Coasters.  Now with the Slate Coasters you can keep your modern and sophisticated style intact while you protect that expensive furniture and […]