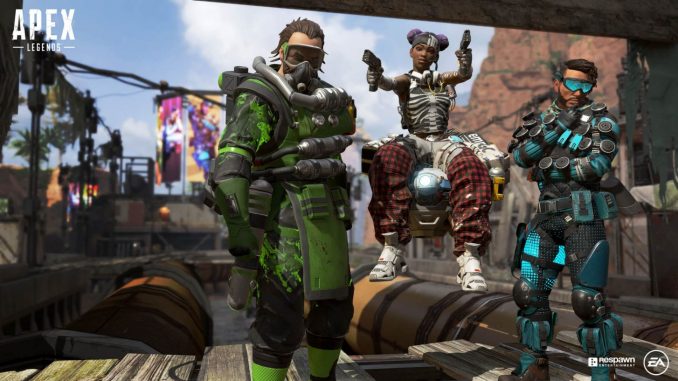 EA and Respawn Entertainment just announced Apex Legends a Free To Play Battle Royale. Simultaneous to the release of the live reveal and numerous trailers (watch them below), they also released the game for free for PC, PlayStation 4, and Xbox One.

Respawn is the company behind Titanfall, and word is that they discontinued development of Titanfall 3 to release this game instead. Although there are no titans, Apex Legends is set in the same universe as Titanfall.

Visit their website for more information and to play for free.

Conquer with character in Apex Legends, a free-to-play* battle royale game where legendary challengers fight for glory, fame, and fortune on the fringes of the Frontier. Explore a growing roster of diverse characters and experience intense tactical squad play in a bold, new evolution of battle royale.

The launch trailer is highly stylized, and you may not like that hand-drawn, low-framerate look. To get a better idea of what the game is like, watch the Apex Legends Gameplay Trailer:

Pick your character. Round up your squad. Show everyone what Legends are made of.

Choose from a lineup of outlaws, soldiers, misfits, and misanthropes, each with their own set of skills. The Apex Games welcome all comers – survive long enough, and they call you a Legend.

Pick your Legend and join forces with other players, combining your unique skills to form the ultimate squad.

If you’re going to survive the Apex Games, you have to think fast. Master your Legend’s abilities, make strategic calls on the fly, and use your team’s strengths to your advantage in vicious 60-player matches.

Experience the next evolution of battle royale with Respawn Beacons you can use to resurrect your teammates, Smart Comms to help you communicate, Intelligent Inventory so you can grab only what you need, and an all-new way to drop into the action with Jumpmaster deployment.

The Frontier War is over. After hundreds of years of conflict between the Interstellar Manufacturing Corporation and the Militia founded to fight them, the far-off region of space known as the Frontier can finally know peace.

But liberation can come at a cost: when the IMC and the Militia departed, they took everything of value and left the Frontier worlds in disarray. With no way to support themselves, the people of the Frontier had no choice but to leave their homes. The brave relocated to the Outlands.

A remote cluster of planets on the fringes of the Frontier, the Outlands are untouched by war and teeming with resources and opportunity. But life is cheap here, and danger lurks around every corner. Its pioneers, explorers, and outlaws used to spend their lives locked in an endless power struggle – now, they settle their differences in the Apex Games, a bloodsport where Legends from all corners of the Frontier compete for money, fame, and glory.

Take a look behind the scenes with the Apex Legends Launch Developer Diary:

As you can see in the video above, the developers of Apex Legends pride themselves on creating very unique and original characters for the game. Watch the following trailers to learn about some of the legendary characters.

Pathfinder booted up thirty years ago in an abandoned laboratory with no idea who created him or why. He’s hoping to draw the attention of that creator by participating in the Apex Games.

Wraith is a fierce fighter who can manipulate spacetime by opening rifts in the fabric of reality. She joined the Apex Games to learn the truth of her forgotten past.

Bangalore once served as a weapons specialist in the IMC Armed Forces. She now fights in the Apex Games to find a way back home. Whether she’s using her Smoke Launcher or Speed Burst to get the jump on enemies, or Rolling Thunder to call in an artillery strike, you’re in for a world of hurt.

Lifeline has devoted her life to helping those in need. She joined the Apex Games to fund the Frontier Corps with her winnings.

Bloodhound is one of the greatest game hunters the Frontier has ever seen, but their identity is a mystery.

They say Caustic was once an idealistic scientist with a bright future. But his research took a dark turn, and now he’s found a new group of test subjects.

Gibraltar is a gentle giant who has devoted his life to helping others. His friends joined the Apex Games for money and glory – he joined to keep them safe.

If you like Battle Royale games like Fortnite, check out this Islands of Nyne: Battle Royale Gameplay Trailer. It looks like the action is smooth, fast, and furious. What sets it apart from some of the other Battle Royales like PUBG and Fortnite is that […]