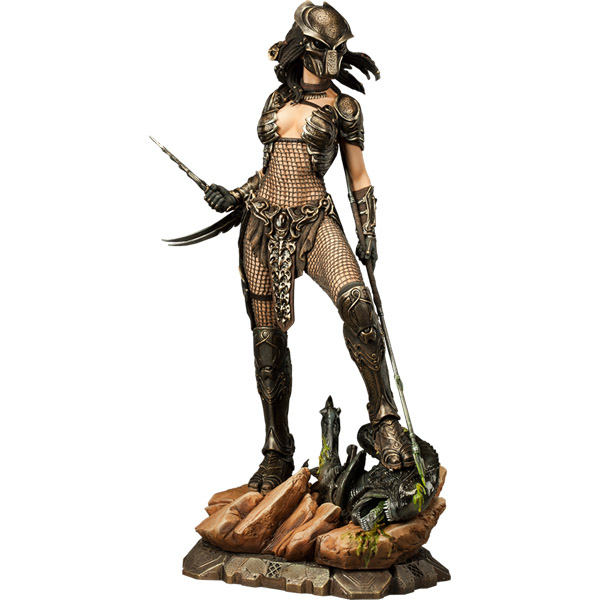 Very few humans have what it takes to go from being prey to Predator but the Alien VS Predator Machiko Noguchi Premium Format Figure reveals one woman who made the transition so well that fans refer to her as the She-Predator.

Machiko, known as Da’dtou-di (meaning “small knife”) to her Predator clan, showed just how awesome she could be when she took on a Queen Alien in combat and won, taking the queen’s head as a trophy. That glorious moment is captured with this 21.5-inch-tall figure, with the She-Predator standing triumphant over her kill.

Having no need for human clothes when on the hunt, Machiko is dressed in customized Predator armor with a fabric netted body suit, sporting dreadlocks and a lethal combination of Predator weapons that include razor-sharp wrist gauntlets, a combi-stick spear, and a shoulder-mounted plasma cannon. She can be displayed either with or without her mask.

The Alien VS Predator Machiko Noguchi Premium Format Figure will be available April 2015 but it can be pre-ordered now for $439.99 (or for as little as $66/month) at Sideshow Collectibles.

The Alien Vs. Predator Clue game is the classic game of clue but with an Alien vs. Predator twist. Do you have the power and skills to capture the Alien Queen? You will find out. You will have to work with your Predator friends to […]