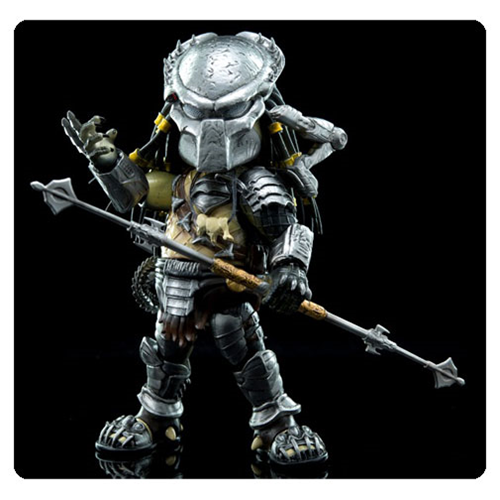 The HMF#031 Wolf Predator has over 20 points of articulation so you can display him in any way you want. The Wolf Predator’s mask can be removed to reveal its organic face beneath. The body, arms, and legs are made with metal alloy and PVC outfits to display details of Wolf’s armor and body.

It also comes with many accessories, including 6 interchangeable hands, 2 interchangeable faces, 2 combi-sticks (one retracted and one extended), syringe gun, plasma caster, closed Whip, and extended whip! He stands 6-inches tall. $94.99 from Entertainment Earth. Pre-order it now for June.

This Predator Hybrid Metal Figuration Die-Cast Metal Action Figure from the original Predator film has 20 points of articulation which provides great mobility and allows you to pose it anyway you want. The Predator’s mask can be removed to reveal its face beneath. The body, […]

It looks like this and it has been captured in this Alien vs. Predator: Requiem Predalien Hybrid Metal Figuration Die-Cast Metal Action Figure. This Predalien even has some hidden features like the second mouth and inner jaw. The main part of the body is made […]

The Alien Vs. Predator Clue game is the classic game of clue but with an Alien vs. Predator twist. Do you have the power and skills to capture the Alien Queen? You will find out. You will have to work with your Predator friends to […]

The Aliens Alien Queen Hybrid Metal Figuration Die-Cast Metal Action Figure is incredibly detailed and features multiple adjustable fins on her back, a retractable head, and a spring loaded mouth piece! It is absolutely terrifying. It also has replaceable large and small hands, and a […]