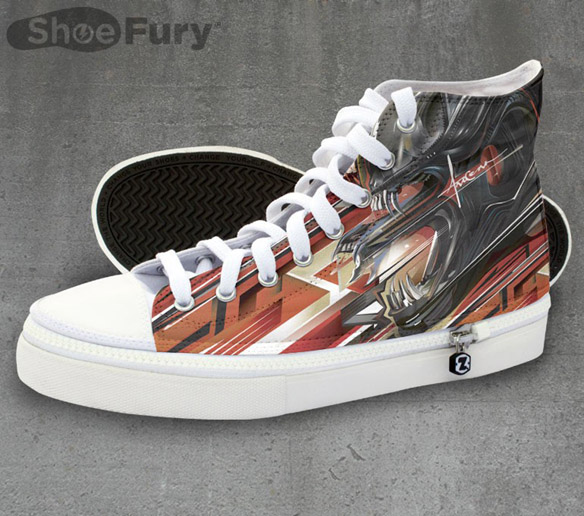 Fans of the Alien films will probably like these Alien Rage Shoes, but the awesome art can’t disguise one tiny flaw with the actual shoes.

I love this vibrant close-up image of an attacking Xenomorph, and if you don’t have any other shoes like this, it would be insane to pass them up. The problem comes for those who already have shoes like this, just with a different awesome image on the tops. The creative zipper design theoretically allows you to swap tops by unzipping one set and then zipping on another set. Unfortunately, there’s no option to buy just the tops. It’s the whole shoe or nothing… which sort of defeats the purpose of the zipper.

Like I said, these are awesome shoes with an attention-getting design (created by Orlando Arocena) so don’t pass them by if the lack of being interchangeable doesn’t bother you. Hopefully, the tops-only option will be available soon.

The Alien Rage Shoes are available for $79.99 at TeeFury.

This Alien Saga Poster Collection will make sure that you have some awesome art for your wall. 40 amazing photographs from Alien, Aliens, Alien 3, and Alien Resurrection. These are glossy, high-quality removable posters on thick paper. They all come to you in a softbound […]